Shu Lea Cheang’s Brandon, the Guggenheim Museum’s first-ever online commission, was a year-long web narrative and performance that explored what Cheang called the “digi gender social body”—the online, socially constructed body, such as an avatar—as a site of potential violence, control, and liberation.

The project began with two articles that Cheang read in the Village Voice. One told the story of Brandon Teena (December 12, 1972–December 31, 1993), a young Nebraska trans man who was brutalized and murdered. The other, Julian Dibbell's "A Rape in Cyberspace," described a rape spree that took place in a text-only chat room, and nevertheless left its victims feeling violated and bereft. Drawing a connection between these very different episodes of violence, Cheang began a years-long research process to "consider gender fusion and techno-body in bouth public space and cyberspace."

This ultimately came together in an epic web narrative that involved numerous institutions and collaborators, taking the form of installations, discussion forums, networked performances, and web narratives. Through Brandon, Cheang convened an important dialogue about the affordances and limits of the bodies that users construct online, and highlighted the persistence of gender-based oppression in the seemingly liberatory context of the net.

A new restoration of this landmark work, undertaken by the Guggenheim Museum, has been unveiled to coincide with its inclusion in Net Art Anthology.

“Brandon was conceived at a time that I moved from actual space to cyber/virtual, claiming myself a cyber-nomad. It was around the mid-90s, and there was high hope for a super-highway, for a virtual world where race/gender does not matter any more.” —Shu Lea Cheang

Over the course of 1998 and 1999, Shu Lea Cheang and her collaborators created web compositions—bigdoll, roadtrip, mooplay, theatricum anatomicum, and panopticon—that acted as “interfaces” to a multi-layered narrative, which also played out online and off, across gallery installations, chatrooms, and networked performances. 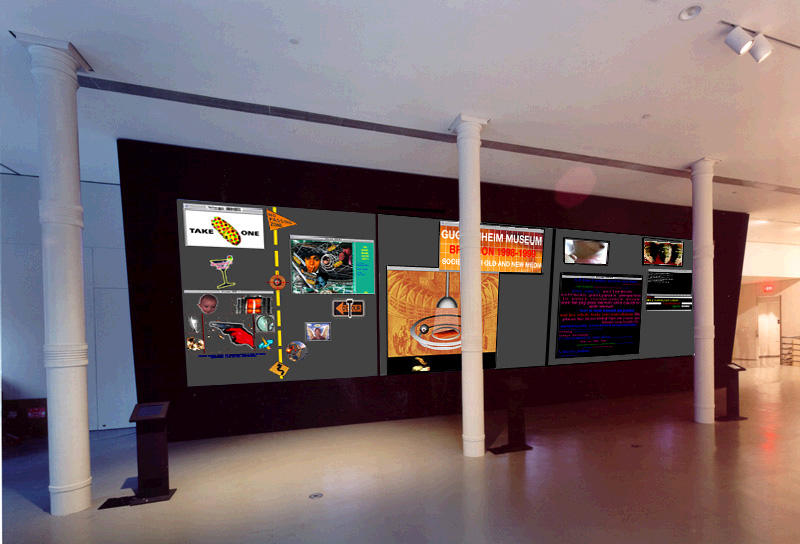 View of Brandon on the Guggenheim Soho’s video wall, 1998 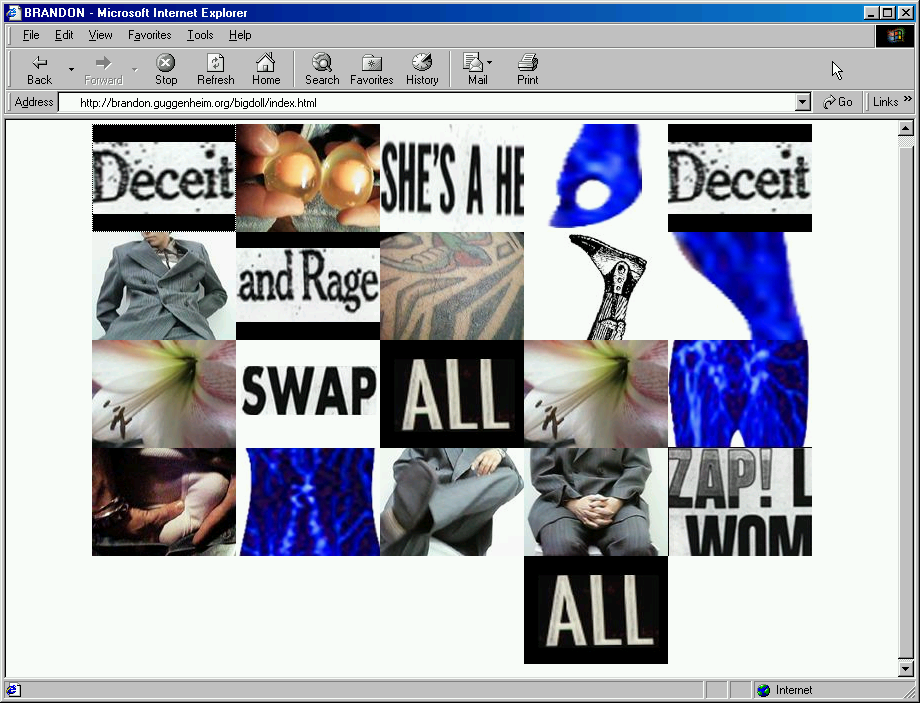 Brandon opens with the bigdoll interface, which features a cryptic grid of images that change as the user mouses over them; clicking reveals an underlying image, a color-separated composite drawing of a mechanically reconstructed knee.

Many of the images portray parts of human bodies, particularly genitalia, which appear alongside fragments of newspaper clippings (“EXPOSURE,”“SHE’S A HE,” “DECEIT”), which reflect the inflammatory language often used by the press in describing Brandon Teena’s gender identity.

The roadtrip interface evokes the experience of driving across the Nebraska prairie. A highway’s orange dividing line scrolls over a black screen, accompanied by road signs and other icons that, if clicked, open to pop-up windows, which offer images of pills, stories of other trans people, and a web search for Brandon Teena.

The roadtrip interface serves as a memorial for Brandon, but takes care not to speak for him. The user is made hyperaware of his story's place in a larger network of narratives of the lives and deaths of trans people. Its fragmented structure contrasts with the more traditional narrative of the 1999 film Boys Don't Cry, which has earned criticism for emphasizing his biological sex and for the lack of trans people among its makers, even though it was met with renown at the time of its release. 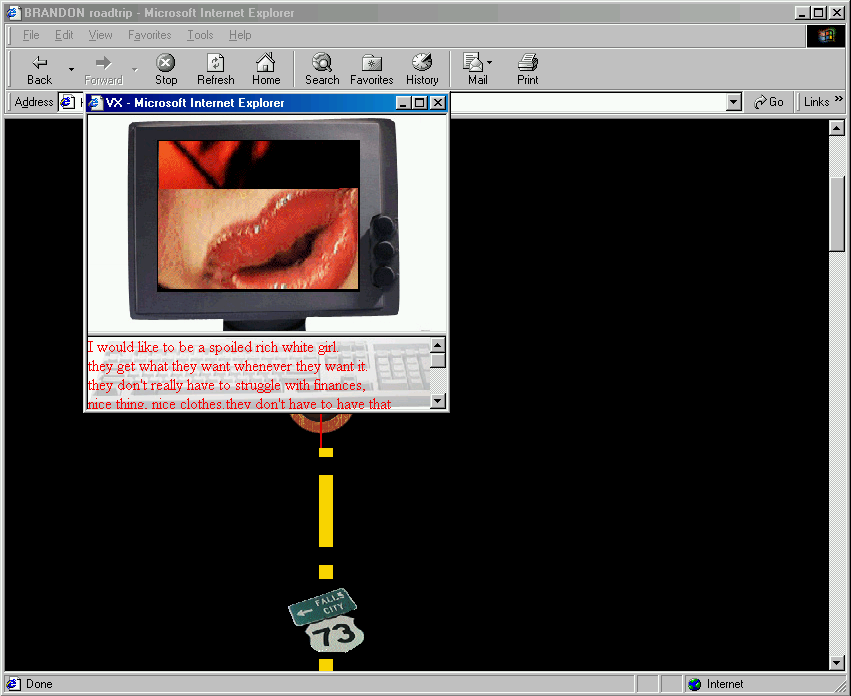 “Brandon Teena was killed for one reason. He was killed because his killers were killers... Because Brandon Teena is dead, he cannot speak for himself, and so it passes to us the mixed honor of memorializing a stranger.”

“Is this all my life was worth, to be used as a character in a tragedy of someone else’s making?” —fictional narrator from the roadtrip interface

Drawing its name from the multi-user online environments known as MOOs, the mooplay section of Brandon was a recombinant narrative drawing on texts written by three authors: Pat Cadigan, Lawrence Chua, and Francesca da Rimini (aka GashGirl).

“Essentially MOOs are virtual spaces where users can log on...and, via text, communicate, create and play in real time...GashGirl’s MOO of choice is LambdaMOO because of its populist nature. It’s not unusual for 200-250 people to be logged on during peak MOOtime.”
—GashGirl's MOO tute for virtual virgins, 1996

Describing sexual and often violent encounters, the texts in mooplay evoke the case described in Julian Dibbell’s 1993 article “A Rape in Cyberspace,” in which a MOO participant, Mr. Bungle, assaults fellow users by temporarily hijacking their characters. The article illustrated the way in which online bodies function as a “psychic double,” closely identified with their users and therefore vulnerable to onscreen violence. 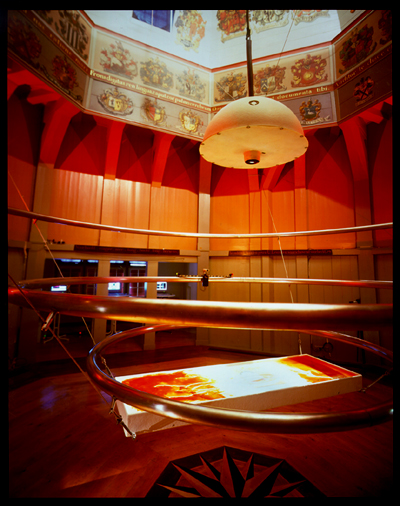 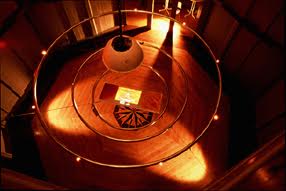 This installation by Atelier Lieshout, which featured a revolving webcam, was used during Brandon’s launch event on June 30, 1998 to upload live images to Brandon from the Theatrum Anatomicum in Amsterdam.

In “A Rape in Cyberspace,” the MOO's users held an informal online trial and decided to banish Mr. Bungle, acknowledging the harm that was done and leveling punishment. In Brandon, the online trial was used as a framework for dialogues exploring gender codes, the criminalization of transness, and the internet.

Screenshot of interface for the Brandon launch event, June 30, 1998.

The theatricum anatomicum interface links to three events that took place as part of Brandon–a launch event, a "netlinked forum" called Digi Gender Social Body: Under the Knife, Under the Spell of Anesthesia, and a virtual trial, titled Would the Jurors Please Stand Up? Crime and Punishment as Net Spectacle. Linking Guggenheim Soho with De Waag Society for Old and New Media in Amsterdam, these events took place both online and off, involving webcast and chat.

Digi Gender Social Body: Under the Knife, Under the Spell of Anesthesia, co-produced by Cheang, her collaborators, and the Guggenheim Museum, took place in the Theatrum Anatomicum of De Waag—a space that was used for public anatomical dissections in the seventeenth and eighteenth centuries—and was broadcast in NYC at the Guggenheim Soho and online. The event brought together critics, medical professionals, and technologists to explore the binary coding of gender and of the digital.

If the trial of Mr. Bungle represented a hopeful potential for the online courtroom, Brandon's panopticon interface reflected the history of criminalization of trans people.

The panopticon interface uses Jeremy Bentham's diagram of a prison optimized for surveillance as a navigational aid. Cells link outward to images and stories of the repression faced by trans and gender-nonconforming people at the hands of the state, including historical, contemporary, and speculative examples.

“No one (including myself) can claim to have viewed the entirety of this work.” —Shu Lea Cheang

In 2016, the Guggenheim Museum set out to restore Brandon. The restoration team sifted through tens of thousands of lines of code, meticulously rewriting outdated or broken links and code in ways that maintained the site's original appearance and function. The restoration is presented for the first time as part of Net Art Anthology.

Brandon was produced in association with the Society for Old and New Media (now Waag Society), Caroline Nevejan and Suzanne Oxenaar, the Institute on the Arts and Civic Dialogue, Anna Deavere Smith and Andrea Taylor (Directors), Banff Center for the Arts, and Sara Diamond

Shu Lea Cheang is an American artist and filmmaker who lived and worked in New York city in the 80s and 90s and relocated to EuroZone since 2000.Active in experimental video and net art since the early 80s, her work deals with techno body and queer politics. Among her most important net art works are Bowling Alley (1995), in the collection of the Walker Art Center in Minneapolis, Buy One Get One (1997), in the collection of NTT[ICC] in Tokyo and Brandon (1998-1999), a multi-artist-author-institution collaboration, commissioned and collected by the Guggenheim Museum.

Following her first feature FRESH KILL (1994, shown at Whitney Biennale 1995), she premiered her sci-fi porn I.K.U., an Uplink Tokyo production at Sundance Film Festival in 2000. Her focus shifted to digital commons and open bandwidth since 2001, with the projects Kingdom of Privacy (a collaboration with Armin Medosch and Yukiko Shikata, 2002), Burn (2003) and Garlic=Rich Air (2002-2003). Other notable recent works include the Locker Baby project (2001–2012) in 3 parts: Baby Play (2001, exhibited at NTT[ICC], Tokyo), Baby Love (2005, exhibited at Palais de Tokyo, Paris) and Baby Work (ZERO1 Biennial 2012, San Jose). UKI (2009-), a sequel to I.K.U. was realized as viral performance and viral game (2009 -2016) and being developed as UKI, cinema interrupted with a Dicréam grant in France. From homesteading cyberspace in the 90s to her current retreat to post-crash BioNet zone, Cheang takes on viral love, bio hack in her current cycle of works. In 2017, she released her third feature FLUIDØ at Berlinale Berlin Film festival and is currently developing Unborn0x9, an open hardware hack project with ultrasound echo-stethoscopes and in production on Wonders Wander, a mobi-web-serial for Madrid Pride 2017.