Seth Price’s Dispersion is an artwork in the form of an art historical essay. Originally released at a time when the internet was beginning to affect nearly all aspects of culture, it argued that distribution, rather than production, was the primary way in which works accrued meaning, and that artists needed to find ways of harnessing the enormous capacity for meaning-making inherent in communications networks.

In keeping with this emphasis on distribution, the work was released in various formats and versions over many years, including pages on Price’s website, widely circulated PDFs, print publications, and sculptural objects. Although it was deeply engaged with the net, Dispersion specifically addressed the contemporary art system, and laid the foundation for Price’s move to gallery-based work with an exhibition at Reena Spaulings Fine Art in New York City in 2004.

As artists working in diverse media increasingly began to account for the effects of the network on their practice and on the gallery system, Dispersion became an influential and widely cited touchstone. It is included in Net Art Anthology in recognition of its importance as both an artist’s critical response to, and intervention into, the workings of the net.

“Production, after all, is the excretory phase in a process of appropriation. It may be that we are standing at the beginning of something.”

Seth Price’s practice often involves inhabiting a given system of cultural production and distribution, and working within its constraints and formulae. An early example of this strategy can be seen in the style of his website from the early 2000s, which was created in the mode of a 1990s-era personal home page, including such tropes as a visitor counter.

Screenshot of early-2000s version of distributedhistory.com, as archived by the artist. Screenshot created in EaaS using IE4.5 for Mac.

One page on the site, titled Phytognomica, was modeled on a different mode of communication, that of a museum or library catalog. It described the conflicts surrounding the circulation of a video showing the final hour of a journalist, Daniel Pearl, who was killed in Pakistan in 2003. Links that seemed to lead to analytics or administrative information about this born-digital object instead led to news articles on the topic.

The articles sketch out a history of the transit of this video file through the network of its time. In particular, they show that the video was often used as supporting evidence in arguments about what people thought the internet should be, and what geopolitical order it should serve.

“One question is whether it has been relegated to the internet, or in some way created by that technology.” – Dispersion

As art historian David Joselit has noted, Dispersion also reflects Price’s interest in the way in which systems of production and circulation can affect images or works of art on a material level, through effects such as contamination and horizontal blur. Price’s 2004 gallery exhibition at Reena Spaulings was populated by stolen, contaminated, blurred, and otherwise degraded images and objects that evoked the larger network structure in which they circulated.

For example, Untitled (2004) consisted of 50-100 CDRs containing download hostage videos, which had been subject to compression and other kinds of “contaminating” effects. This evoked the kinds of digital decay that the Daniel Pearl video was subjected to as it was streamed and pirated, translated from one lossy format to another.

Although Dispersion can be read as a critical essay about art and the internet, reading it as an artwork yields additional insight. The transit of Dispersion through the art system revealed certain affordances of that system: its hunger for content; the importance it placed on specific kinds of writing and graphic design, and the sudden awareness of the need for critical writing about the internet.

“Networks, in other words, provide life support for the individual images that inhabit them; and as in the human body, failure of the circulatory system will lead to death.” – David Joselit

Reinforcing the status of Dispersion as an artwork, Price translated it into a series of physical works in 2008, titled Essay with Knots. Printouts of the InDesign files for the PDF were printed on plastic and formed around knotted ropes. The essay was stretched and molded, treated as image and object without disavowing its status as a digital file or a text, while always emphasizing its status as a part of a larger network of industrial and cultural processes. 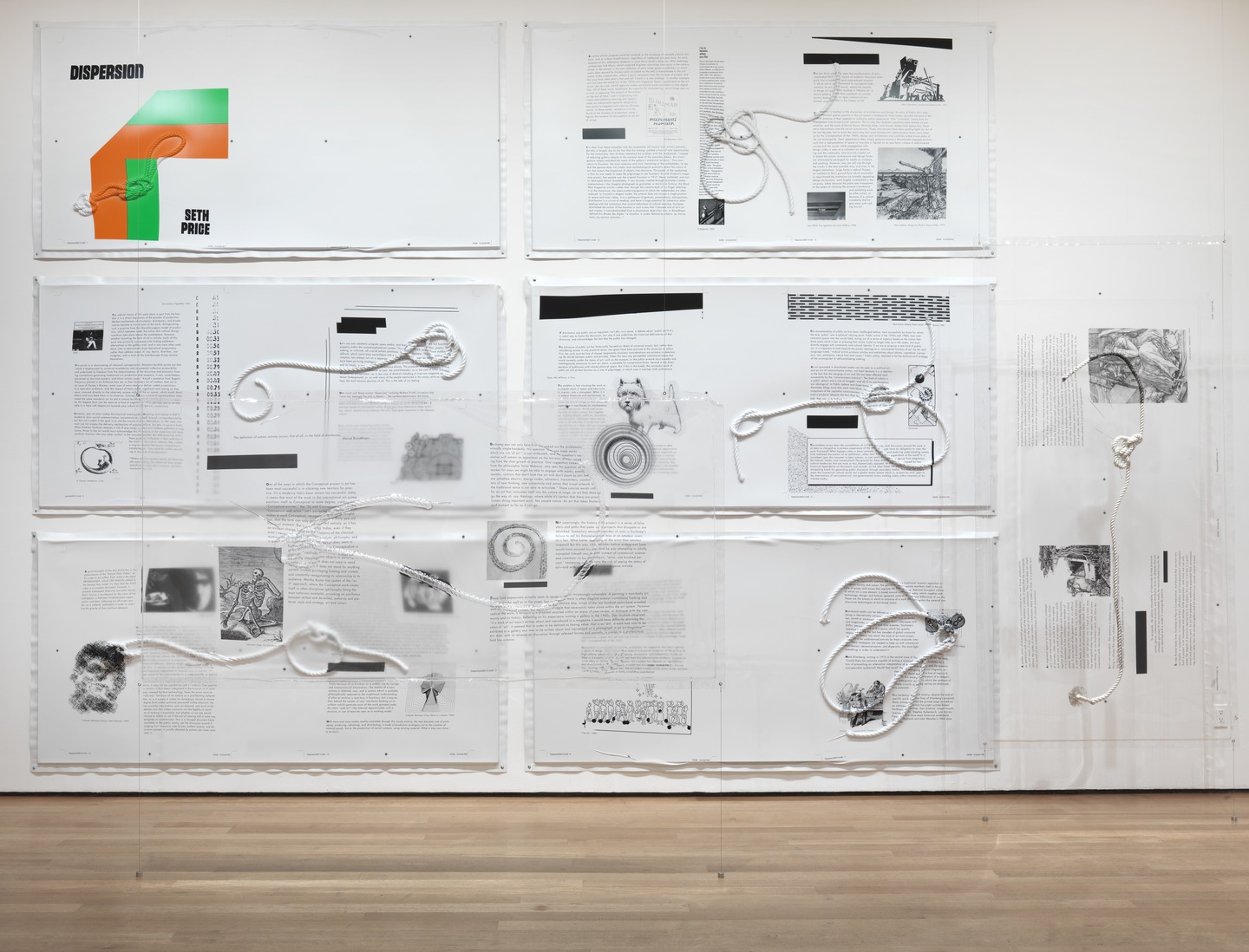 Dispersion offered artists a compelling model for how to engage with communications networks from within the confines of the traditional white cube space. Though the work has been frequently modified and cited over the years, it is rewarding to consider Dispersion's emergence within a specific moment in network culture, when the online circulation of political imagery and speech was hotly contested, while the online circulation of art was often overlooked by the mainstream contemporary art system.