Mariela Yeregui's Epithelia (1999) constructs an exquisite corpse of dynamic HTML. Using some of the technical resources offered by browsers of the day (Javascript-driven popup windows, frames layouts, alert boxes, layers, mouseovers) as well as scanned photographs, drawings, and hand-written notes, Epithelia depicts the body as textual, fragmentary, hybrid and collective.
The site also links to an online forum (now a ghost page) where users could submit text, such as quotes from famous authors or personal thoughts about the body, its parts, or the interrelationships among them. These texts were then incorporated by Yeregui into her “body of work.”

Because of its intense engagement with the Netscape 4.0 feature set, the epic visual poem Epithelia was quickly rendered inaccessible as software evolved. This restoration, curated by Brian Mackern for Net Art Anthology, resurfaces a lost classic of Latin American net art.

Mariela Yeregui is a recognized Argentinian new media artist whose work delves into the human body and its relationship with the network: bodies touching; the distance, brushes, and friction between them; the emergent hybridization of bodies. 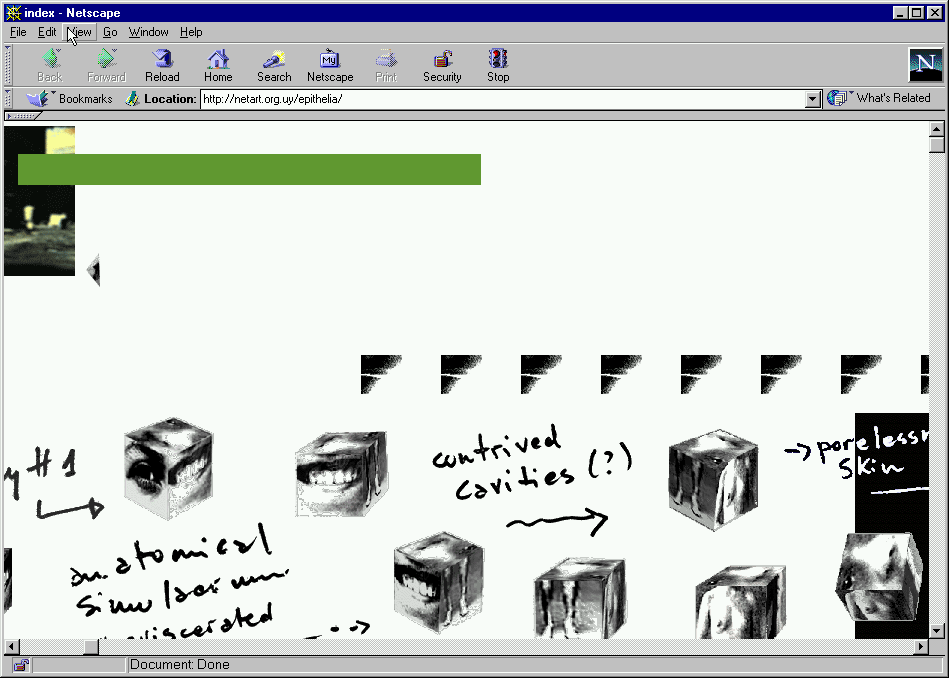 Epithelia begins with a splash page where users can orient themselves to the site’s unusual navigation, such as side scrolling and mouseover events. Rows of nonsensical code are interspersed with handwritten notes. 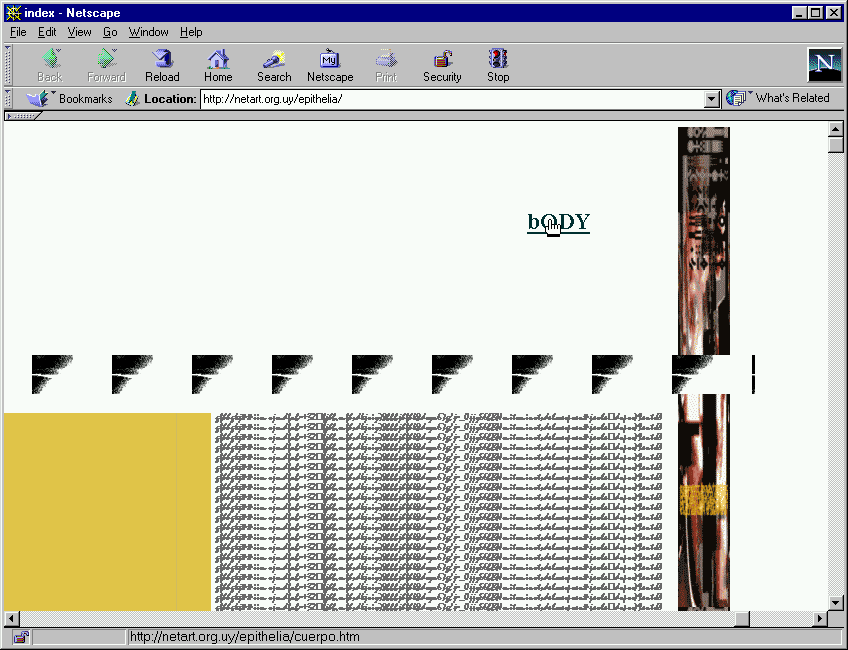 The main page features a large collage of a body, with links at its head, eye, mouth, heart, hand and foot. Though they were taken by Yeregui herself, the images appear as if they were taken from old anthropology or biology textbooks, treating the body as a specimen. 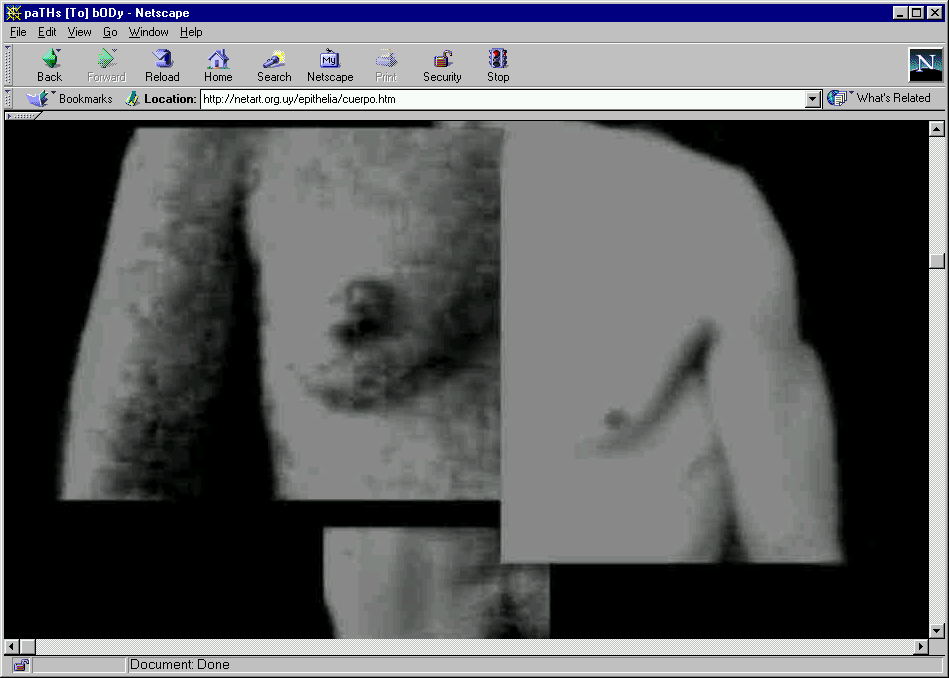 The bodies' dissection–particularly that of the black female–evokes the violence of colonialism and its mania for collection and categorization in the name of science. But the project works through and against this impulse, reasserting the body’s physicality and intersubjectivity. As the user explores the “specimen,” each body part opens out into a new open-ended composition housing fragments of text and images. 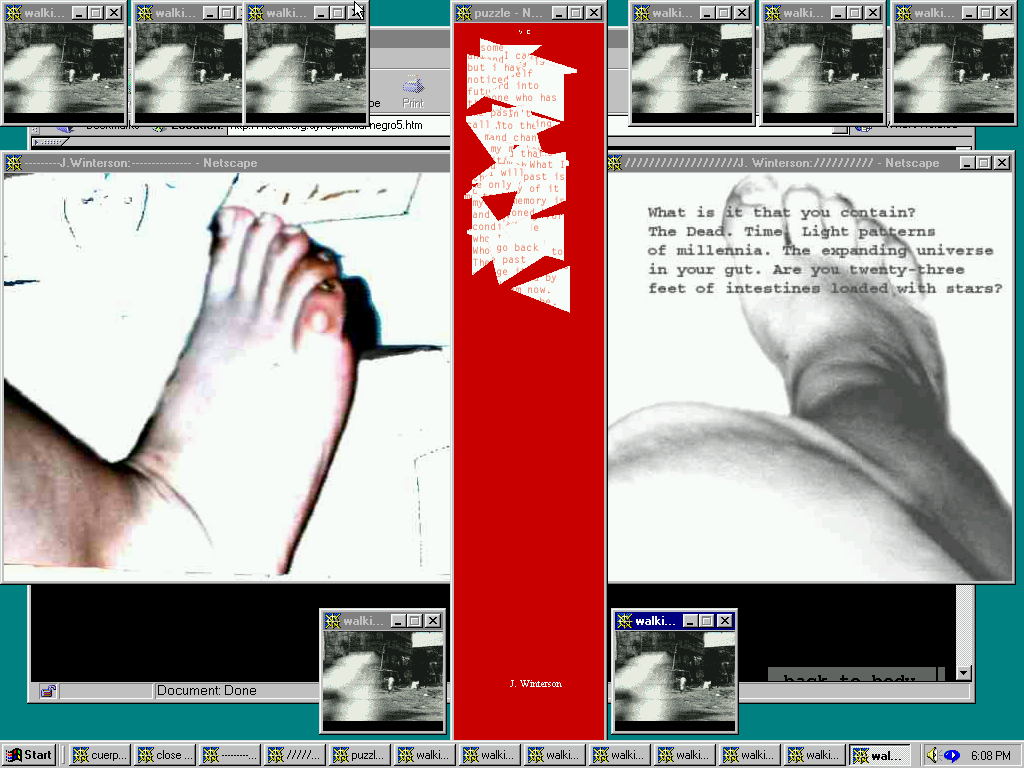 “The ‘I’ that I am, subjective, hesitant, goaded from behind, afraid of what lies ahead, the drop, the space, the gap between other people and myself.” – Jeanette Winterson, quoted in Epithelia

For example, clicking a mouseover image of the heart, the user arrives at a page with religious images - a drawing of a heart surrounded by a number of trembling popup windows. From there the user can open other moving windows with texts that refer to the heart and blood. 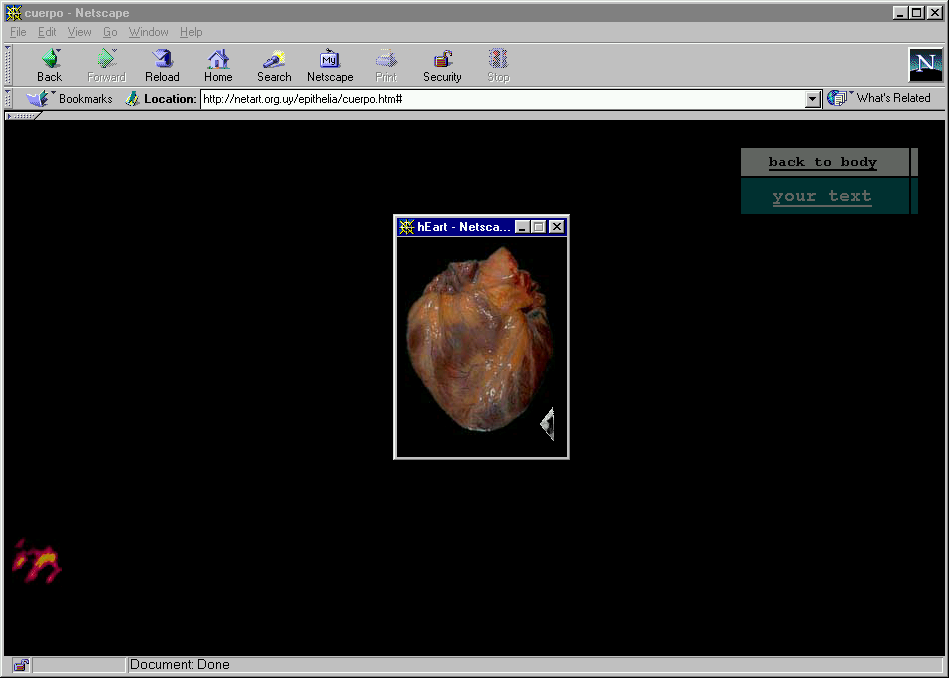 The content associated with each body part varies thematically, but most of the pages center references to philosophical and literary texts, the artist’s own thoughts or visitor´s texts provided through the guestbook that refer to each body-part section. Yeregui's literary bent is evidenced through use of snippets from classic texts such as James Joyce's Ulysses, Walt Whitman's poetry, the writings of T.S. Eliot, and James P. Carse. 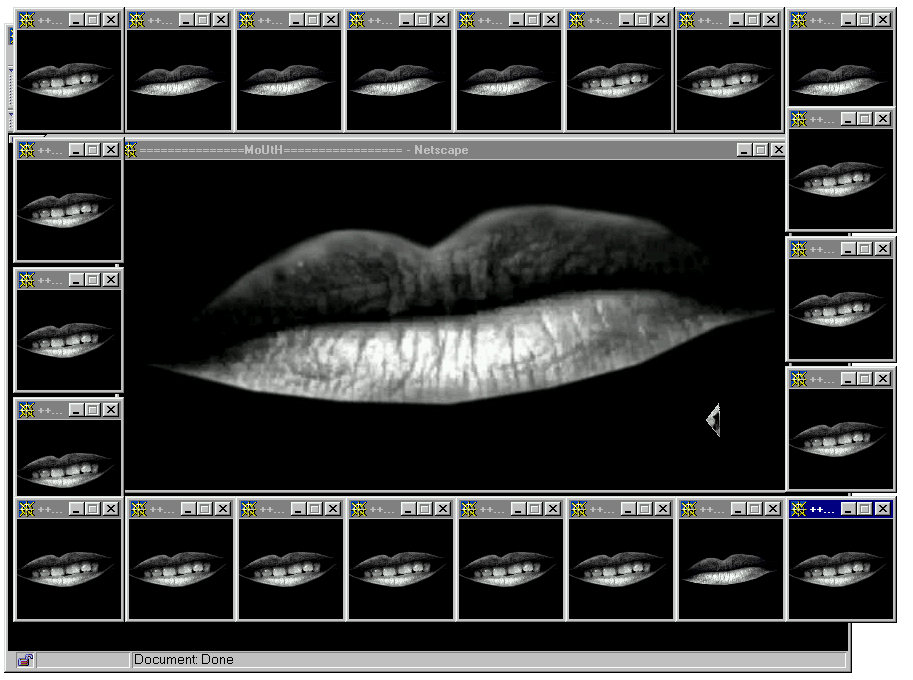 In contrast with the flashy, commercial net aesthetics of its time, Yeregui's Epithelia manages to use dynamic web elements to convey a very personal and intimate touch, as well as a feeling of solitude. She continued developing this distinctive style in later works–such as proxemia/proxemics (2005)–involving robotic installations and fairly complex technology.

Although not fully acknowledged by the wider field, the Latinx net art scene of this time was lively and full of interesting works and artists. You can still visit some of these among loose traces and many 404s (including the original link to Epithelia at the netart latino database (1999-2004), which was an effort to gather information about net artists from the region. 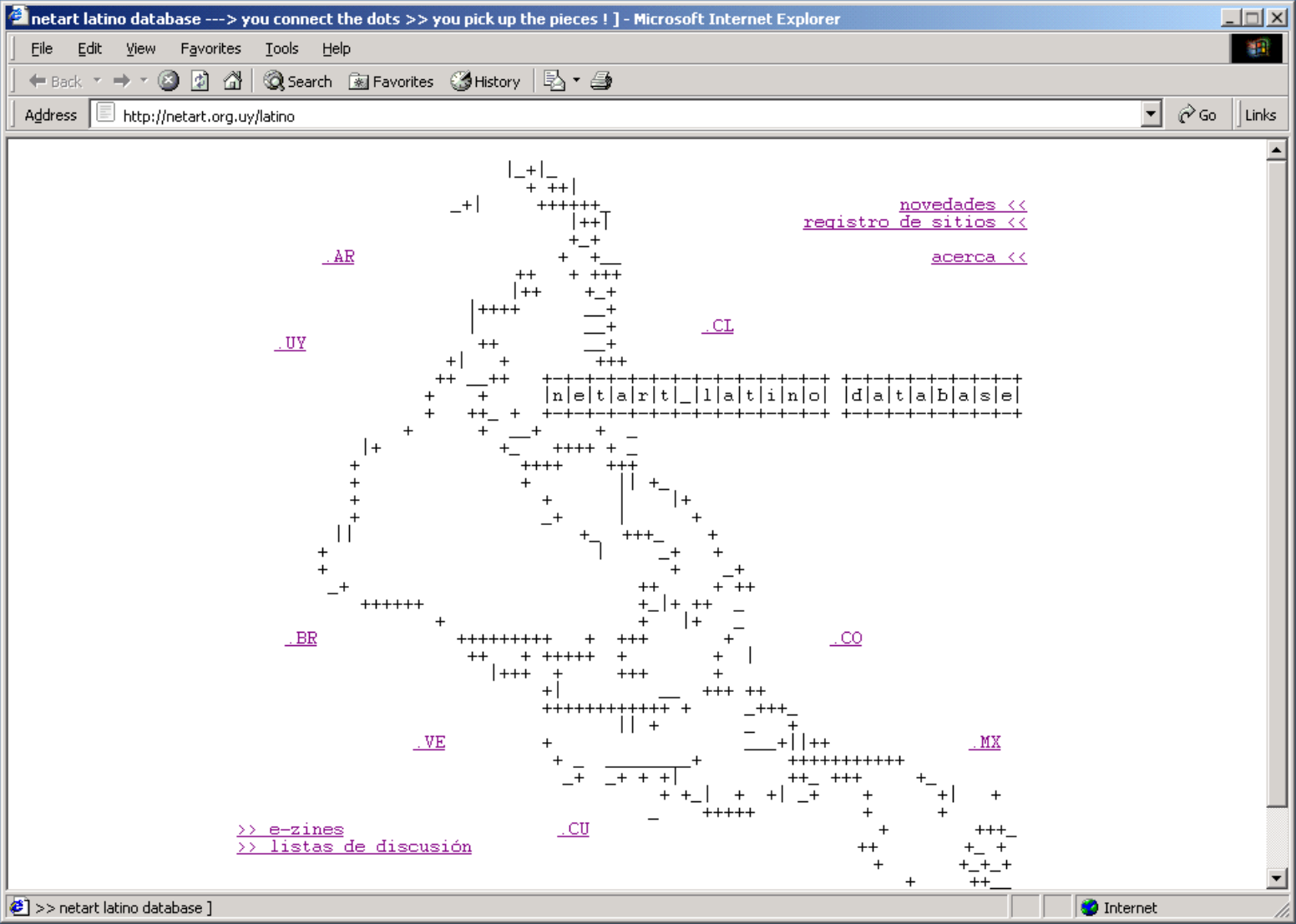 Mariela Yeregui's works include interactive installations, video installations, net art, interventions in public spaces, video-sculptures, and robotic installations. Her works have been awarded prestigious prizes such as the First Prize in BEEP Art (Barcelona) in 2003, the First Prize at the National Salon of Visual Arts 2005 in the “New Supports” category, the Third Prize in the Transition MX Festival, the First Prize in Museum of Modern Art, and Telefonica Prize 2004. She has exhibited in numerous festivals and exhibitions around the globe.

She has a Bachelor's Degree in Arts from the University of Buenos Aires, graduated from the school of the National Institute of Cinematography, and holds a Masters degree in Literature from the Université Nationale de Côte d’Ivoire with a specialization in African literature. She was artist in residence at the Hypermedia Studio (University of California-Los Angeles), the Banff Centre for the Arts (Canada), the MECAD (Media Centre d’Art i Disseny – Barcelona, Spain), and the Stiftung Künstlerdorf Schöppingen (Germany). Jury in ars Electronica Festival, category: interactive media, 2012.