World of Awe is an ongoing multi-platform project by artist Yael Kanarek. Centering around three chapters created between 2000 and 2006, the work follows an unnamed Traveler through a desolate virtual world, Sunset/Sunrise, which is accessed through a portal in New York’s East Village.

Net Art Anthology presents Chapter 1: Forever, in which the unnamed Traveler searches for a lost treasure, narrating their yearning from a laptop that they have rebuilt from electronic scrap. Visitors access the Traveler’s story by opening their files, reading accounts of their journey and their love letters.

Featured in the 2002 Whitney Biennial along with prints of 3D renderings of Sunset/Sunrise landscapes, Chapter 1 brings a new cultural interface—the computer desktop—to a timeless narrative genre, the travelogue, and to the enduring artists’ task of worldbuilding. In doing so, it evokes the ever-present longing, isolation, and ruin that are the repressed remainders of digital culture. 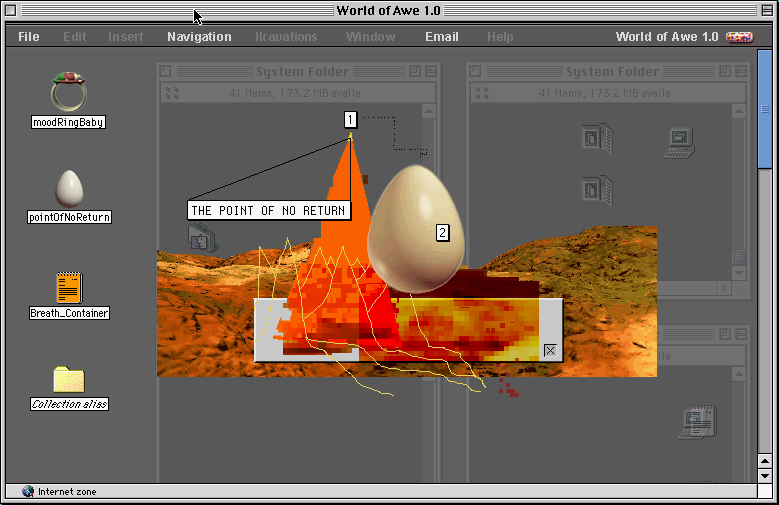 “Through a portal on 419 East 6th street in Manhattan, a traveler crosses into the parallel world called Sunset/Sunrise, to search for a lost treasure.”

Entering World of Awe, the user lands on a simulated computer desktop environment with a single window open, which houses a rendering of a desert landscape—the parallel world of Sunset/Sunrise, where an unnamed narrator called the Traveler journeys. The contents spill out from here. Clicking on any one of the desktop icons or menu items leads to a love letter or an entry in the Traveler’s log.

The Traveler’s journal entries are mournful, detailed accounts of their experiences in Sunset/Sunrise. Some are direct and documentarian in style, and other entries veer toward the poetic and fantastical. The love letters, written but never sent to an unnamed lover, are infused with an impossible longing. 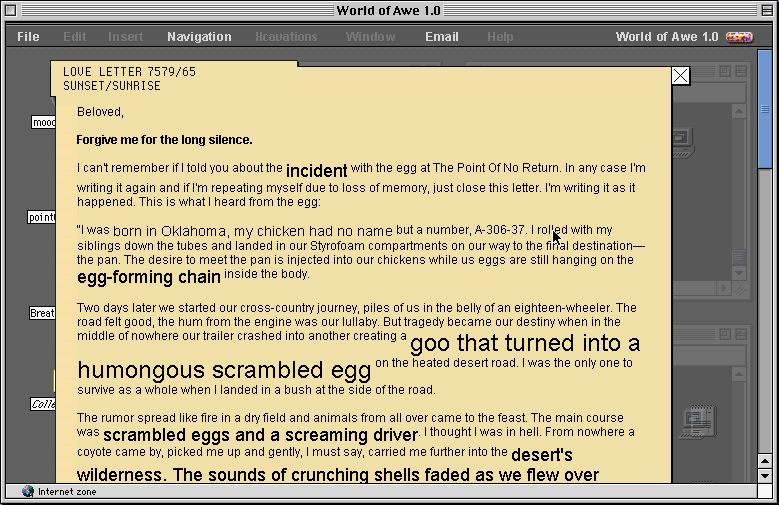 The narrative draws on the conventions of travel literature, a genre that can be traced as far back as the second century CE, but organizes it according to the emerging conventions of the graphical user interface (GUI). 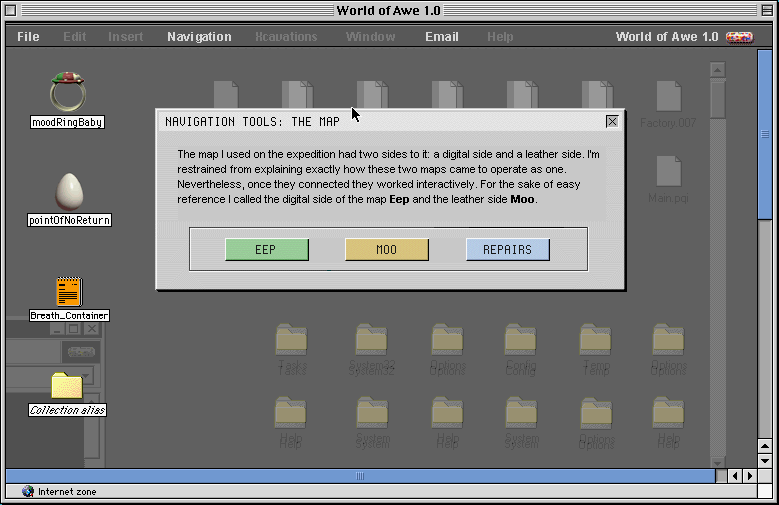 In his Language of New Media, Lev Manovich argued that the GUI was a new kind of cultural interface. Like the printed word or the motion picture, the GUI can organize access to information. In the case of World of Awe, it allows the story to be read in a nonlinear way, interspersed with fictional software tools. 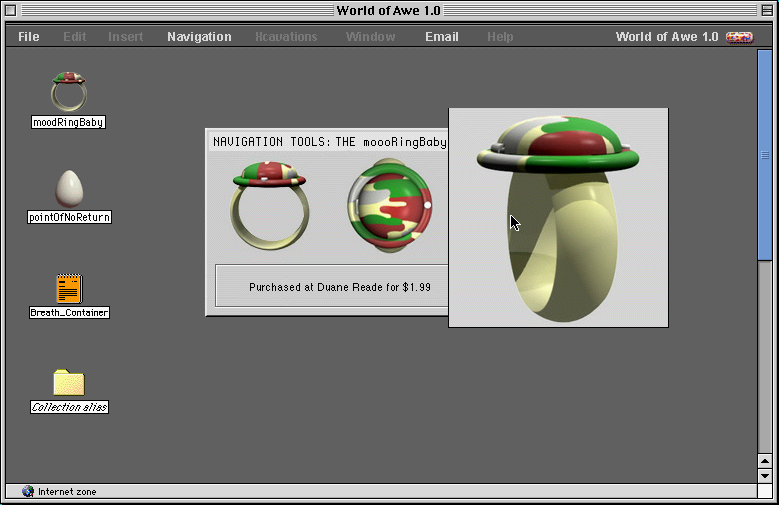 The desktop environment was also, for many computer users, a private space that contrasted with their public web activities. The Traveler’s laptop contains glimpses of their inner life, inscribed in fragmentary fashion into this intimate space. For Kanarek, it is also a worldbuilding tool. Because Sunset/Sunrise is only glimpsed through the mediating device of the laptop, it functions as a kind of virtual world within the larger universe of World of Awe.

“The story of the internet as a boundless, nonlinear space was a perfect home to Sunset/Sunrise.”

Over more than two decades, World of Awe has taken shape across a range of media and platforms. Along with the three chapters of the Traveler’s journal, there were two earlier web-based manifestations; a series of 3D renderings, entitled Nowheres, depicting the landscape of Sunset/Sunrise; a Love Letter Delivery Service, which sent the Traveler’s letters to subscribers’ inboxes; and the interactive dance piece Portal: A Net Dance (in collaboration with Evann Siebens, Meeyoung Kim, and Yoav Gal). A fourth chapter called The Traveler’s Journal is forthcoming. 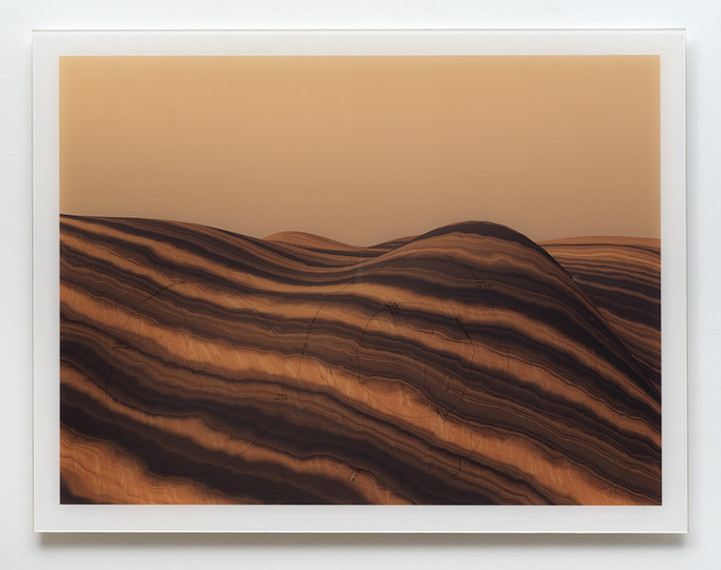