CybeRoberta is a miniature replica of Roberta Breitmore, a fictional persona and alter ego that artist Lynn Hershman Leeson created in the early 1970s. Tillie the Telerobotic Doll, her "evil twin," resembles Hershman Leeson herself. Together, they are the Dollie Clones.

These cyborgian children's toys boast cameras for eyes. When they are on display, visitors can look at the world from their point of view—in the gallery, via live video feed, and online, via the dolls' home pages, where live-updated images are uploaded every thirty seconds. Online visitors can also move the dolls' heads by clicking on the images of their eyes, thereby surveying their surroundings.

The Dollie Clones pick up on many of the themes that Hershman Leeson has explored throughout her career—surveillance, the fluidity of identity, clones and cyborgs, and the performance of gender and the the self—extending these into a networked context. 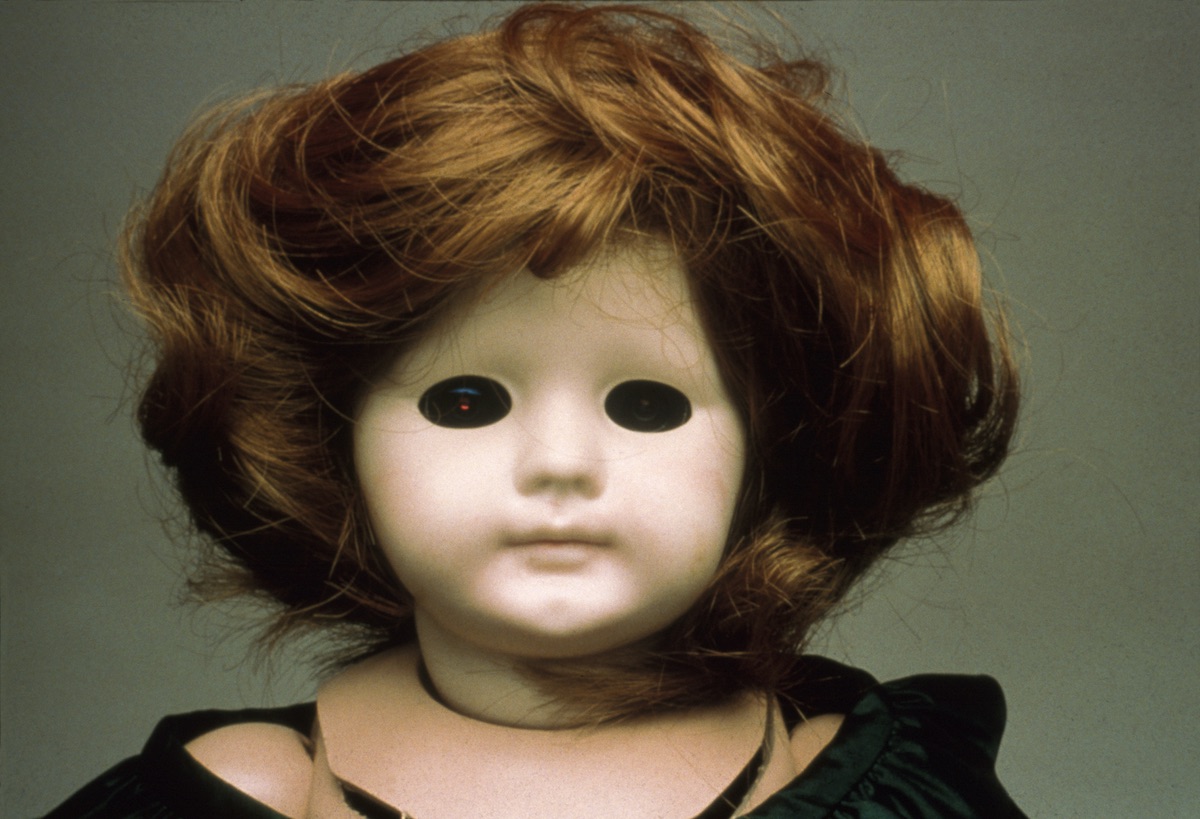 CybeRoberta's home page will display a live feed from the exhibition "Lynn Hershman Leeson: Civic Radar" at the Yerba Buena Center for the Arts through May 21, 2017.

CybeRoberta's page, courtesy of the artist.

The home pages of Tillie and CybeRoberta display a 320 x 240 pixel still image of the dolls' surroundings, updated every thirty seconds when the page refreshes. This pacing was common for early webcams, which were designed to offer live updating imagery across low bandwidth.

Read Simone Krug on the Dollie Clones and the networked gaze at Rhizome.

Early webcams often generated intense public interest even while focusing on mundane subject matter. One of the most famous was the Trojan Room Coffee Pot, which began in 1991 and is generally considered to be the first example of a webcam. It trained a camera on a coffee pot at the University of Cambridge, and went viral on the early web.

With the introduction of consumer webcams like QuickCam in 1994, internet users began experimenting with sharing their own lives via webcam. This included early cam girl experiments: for example, JenniCam (launched in 1996) offered web viewers an ongoing view into the daily life of Jennifer Ringley. 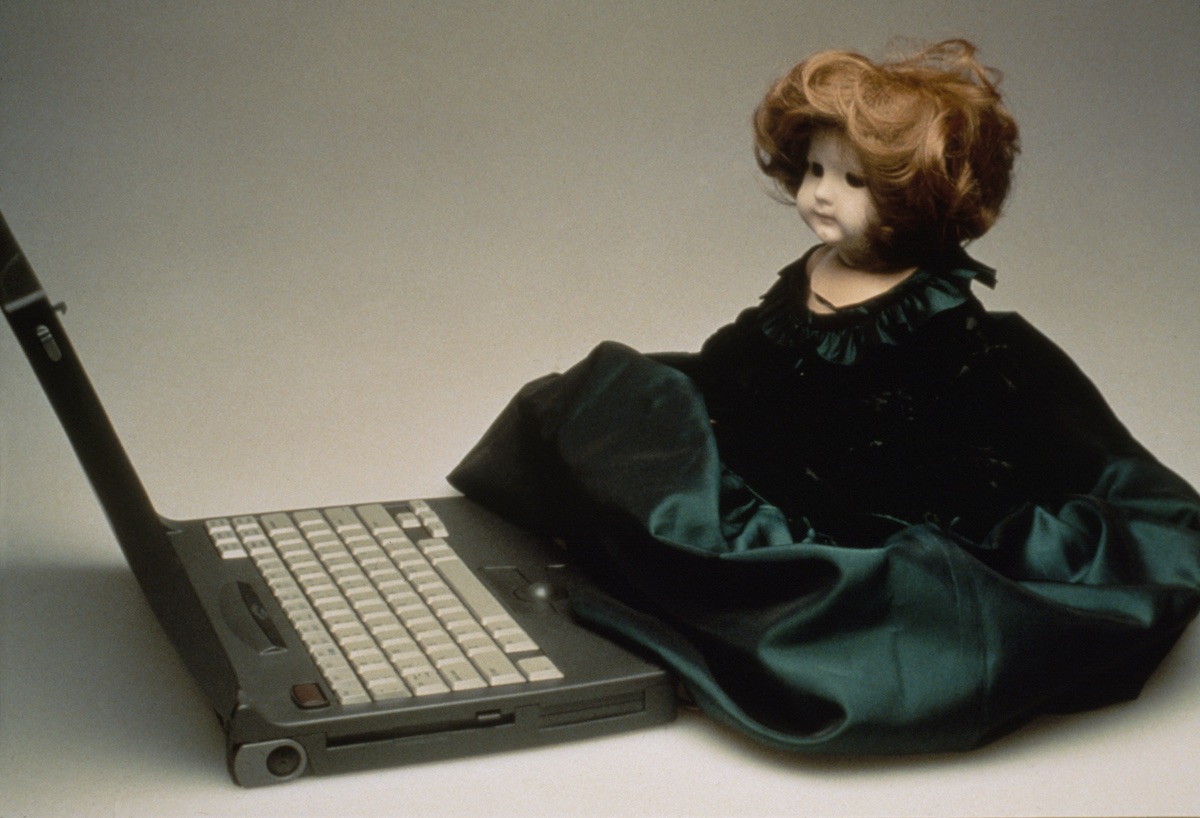 Tillie the Telerobotic Doll at the computer, courtesy of the artist.

In contrast to the cam girls and coffee pots, Tillie and CybeRoberta's cameras looked outward at their surroundings. They were agents of surveillance rather than its subjects.

Looking at Lynn Hershman Leeson through CybeRoberta's eyes, from the exhibition "Moments: A History of Performance in 10 Acts," ZKM Karslruhe, 2011, courtesy of the artist.

At the same time, they were under the control of web users. Visitors to Tillie or CybeRoberta's pages could rotate the dolls’ heads left and right by clicking on the images of their eyes. The dolls subverted this control by sometimes inserting abstracted images of technological bodies into their webcam feed.

Example of an image that is inserted into Tillie's webcam feed.

Read Karen Archey on the Dollie Clones at Rhizome.

The works were among the first "humanoid telerobots." Other artists of the day, such as Eduardo Kac and Ken Goldberg, also explored the possibility of offering users control over an installation or sculpture or even a human body across distance. While this type of work often emphasized empathy and active, collaborative participation, the Dollie Clones drew particular attention to the power relationships among the remote user, the remote controlled doll, and the surveilled gallery audience.

Image of Eduardo Kac's telerobot Ornitorrinco, as seen by his teleborg during the performance Ornitorrinco in the Sahara, 1996.

"Tillie is a doubling of CybeRoberta as a doppelgänger of Roberta Breitmore as a shadow of Hershman." —Steve Dietz

When they are shown together, the identities of the Dollie Clones begin to blur. When one doll's head is turned to look directly at the other, her website displays the other doll's video feed. Mirrors placed alongside each doll further accentuate this doubling. 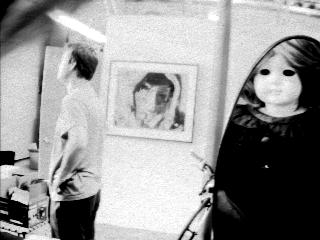 Image taken from Tillie's point of view, showing her reflection in the adjacent mirror.

CybeRoberta is a miniature replica of Hershman Leeson's long-running persona Roberta Breitmore, down to details such as her sunglasses and hair ornaments. Over the course of her existence, Roberta Breitmore performed many common daily activities: she placed classified ads, applied for credit cards, rented an apartment, and joined Weight Watchers. 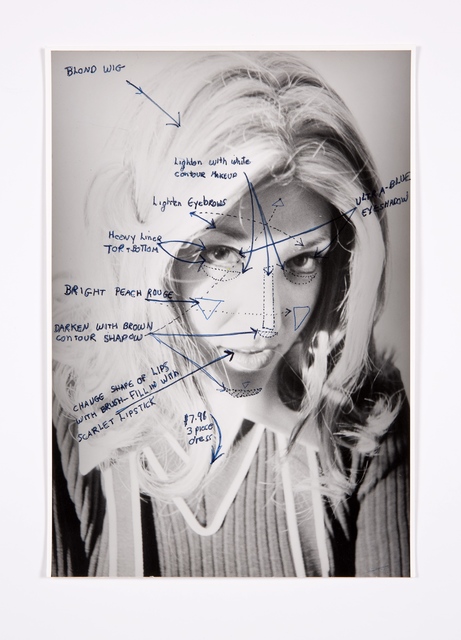 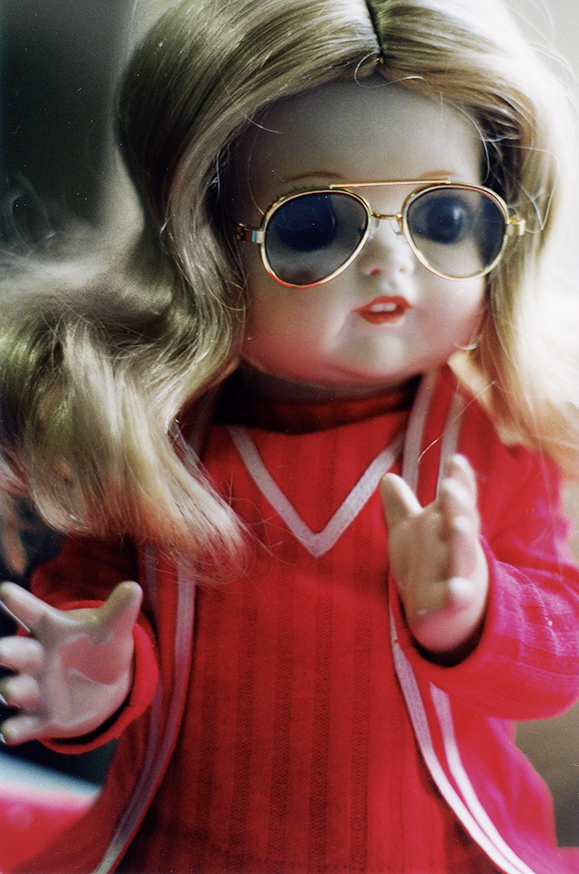 CybeRoberta in Lynn Hershman Leeson's studio, 2010, courtesy of the artist.

Roberta Breitmore's performances have largely gone unseen by art audiences, and are manifested via ephemera and official records. Thus, even before digital technologies were commonplace, her existence played out in informational space as much as physical space.

Likewise, on Tillie's home page, texts and images are interwoven to emphasize the fluid relationship between embodiment and digital information. "The head moves as quickly as networks will allow," one page announces; another presents a threat: "Your eyes are targets." A hidden message in the site's code displays an error-like message stating: "Life is a moving target."

Tillie's homepage, courtesy of the artist.

“When the Dollie Clones were born, I thought to convert Roberta, who had been exorcised about five years earlier, and have her re-emerge as this kind of evil twin that would steal the information from Tillie when they were in some proximity.”

Artist and filmmaker Lynn Hershman Leeson is acclaimed for the pioneering use of new technologies through which she deals with issues such as identity in a time of consumerism, privacy in an era of surveillance, interfacing of humans and machines, and the relationship between real and virtual worlds. Her extensive career focuses on the changing relationship between the body and technology. As a film director she wrote, directed and produced Strange Culture, Conceiving Ada, and Teknolust, all starring Tilda Swinton, which were in the Sundance Film Festival, Toronto International Film Festival, and Berlin International Film Festival. Her ground-breaking documentary !Women Art Revolution has been screened at major museums internationally. Her retrospective exhibition, "Civic Radar," is on view at the Yerba Buena Center for the Arts (San Francisco) in the spring of 2017. Her work is in the collections of the Museum of Modern Art (New York), the San Francisco Museum of Modern Art, and Tate Modern, among others.