Throughout 1996 and 1997, excitement built around the emerging field of net art. As the discourse grew on mailing lists and at conferences, mainstream art institutions took note, but their efforts to engage were often unsympathetic to artists’ desire to create their own contexts online.

In February 1997, the Hamburger Kunsthalle announced Extension, a competition for net art that was described as a virtual extension of the museum. Artists were invited to submit their work by uploading not more than five megabytes of data to a server for review by an esteemed jury. In response, Cornelia Sollfrank created three hundred fake female artists, and remixed existing websites to create “data trash,” which she submitted as their artwork, revealing her gesture at the museum's press conference, where the awardees were to be announced. (As it turned out, the top three awards were all given to men.)

Sollfrank’s gesture drew attention to the museum’s traditional emphasis on the individual creator and the stable art object, at the expense of the larger context or network in which such artists and works thrived. As a gesture of institutional critique, Female Extension raised questions about net art’s relationship to the institution that are still unresolved today.

“My intention really was to destroy the competition.” 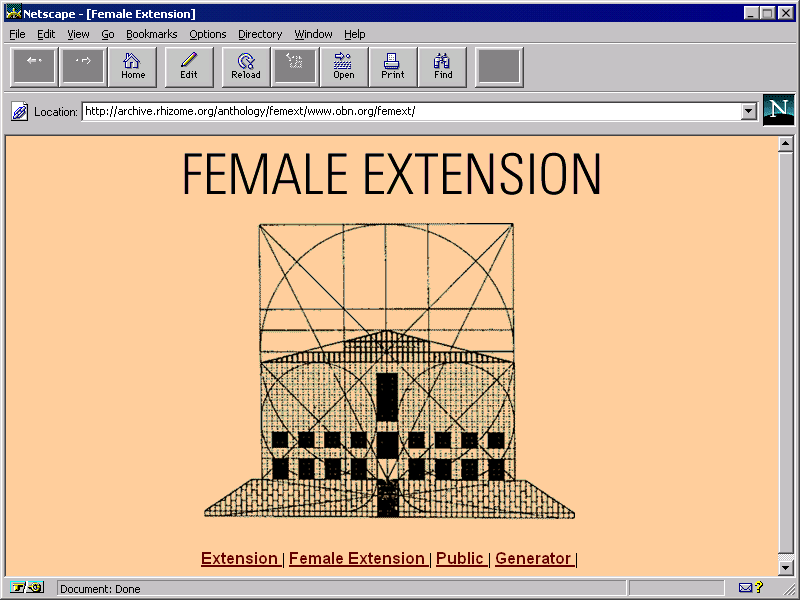 In 1996, Cornelia Sollfrank received a scholarship to spend a year in New York City studying net art. While there, she came into contact with the communities surrounding The Thing, an ISP for artists and activists; Postmasters Gallery; and Rhizome.

“My interest was mainly based on the idea that the internet would not only be a new medium for production but in particular also for dissemination of artworks, or interventions. Things we wanted to do, we could share amongst ourselves and build our own context.”

Read an interview with Cornelia Sollfrank on Rhizome.

In early 1997, Sollfrank received a fax announcing the call for entries for Extension, a new prize for net art organized by the Hamburger Kunsthalle in partnership with Der Spiegel. She saw the prize as an attempt to co-opt the energy of the net art scene and impose the museum's standards on it. 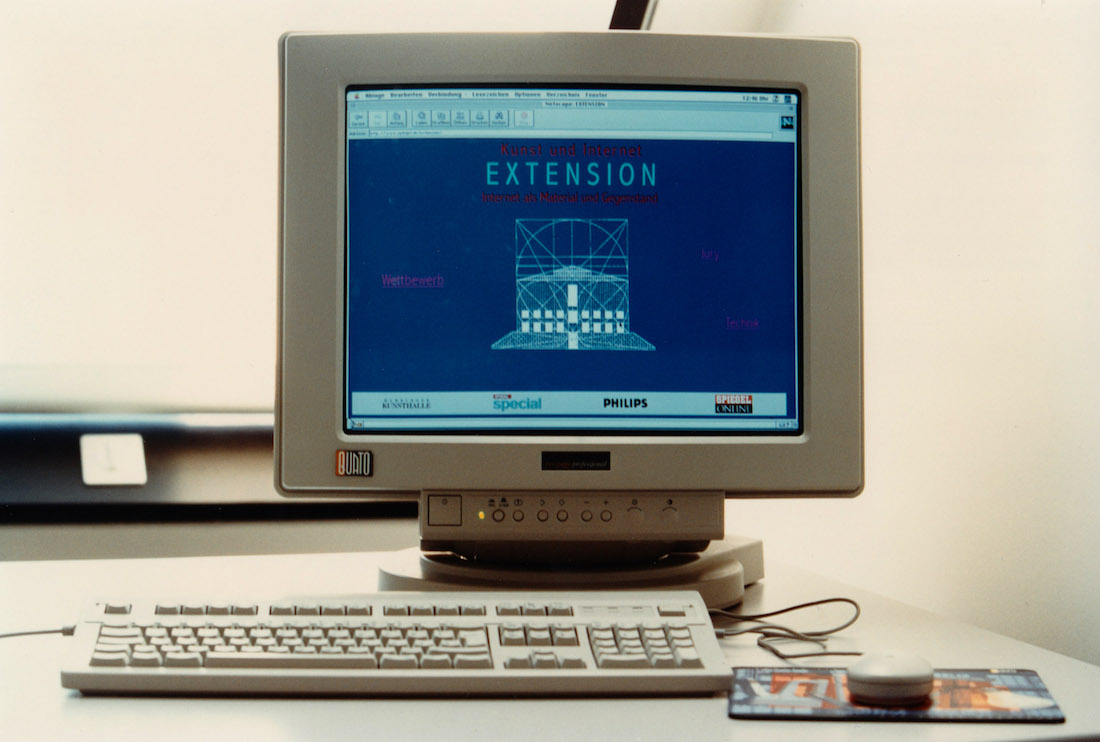 Advertisement for the Extension competition, 1997. A4 photograph. 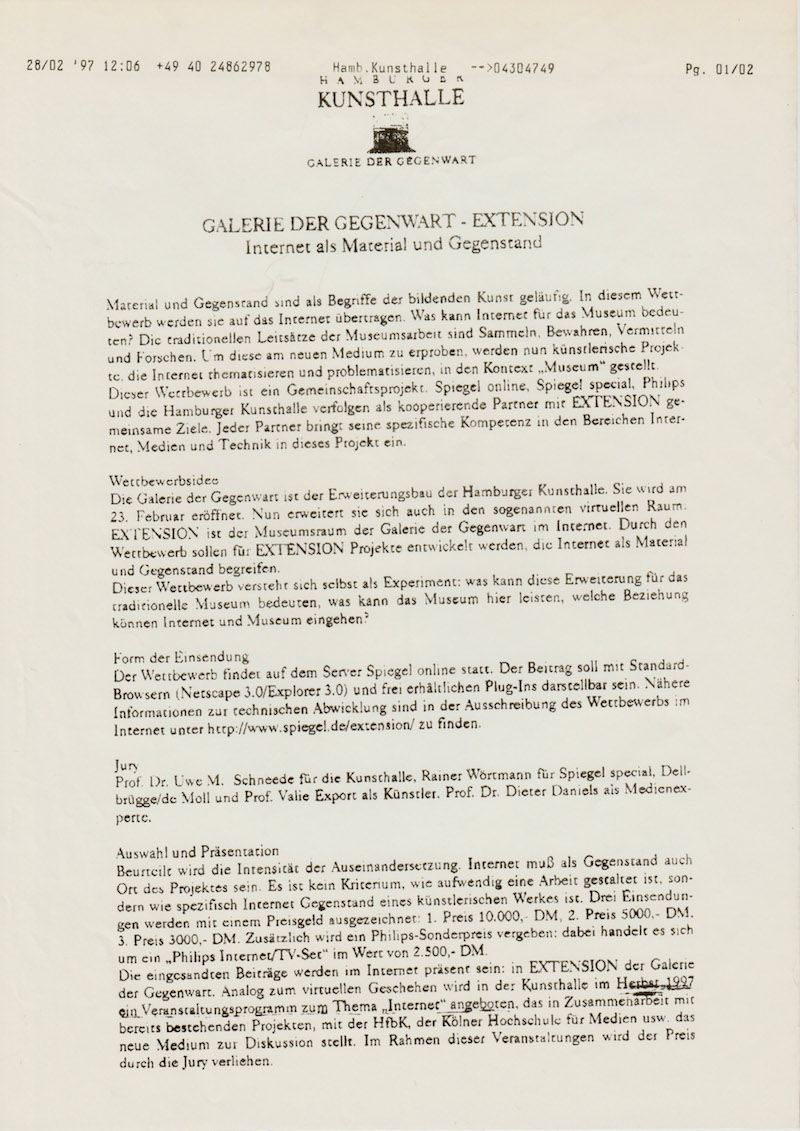 In an effort to highlight the prize’s shortcomings, Sollfrank created 289 fake identities, all of them women, using names and addresses lifted from international phone books. She had to create individual email addresses for each, which in 1997 was not easy; to accomplish this, she relied on her contacts at important hubs of 1990s net culture such as The Thing and Ljudmila, which managed their own mail servers. 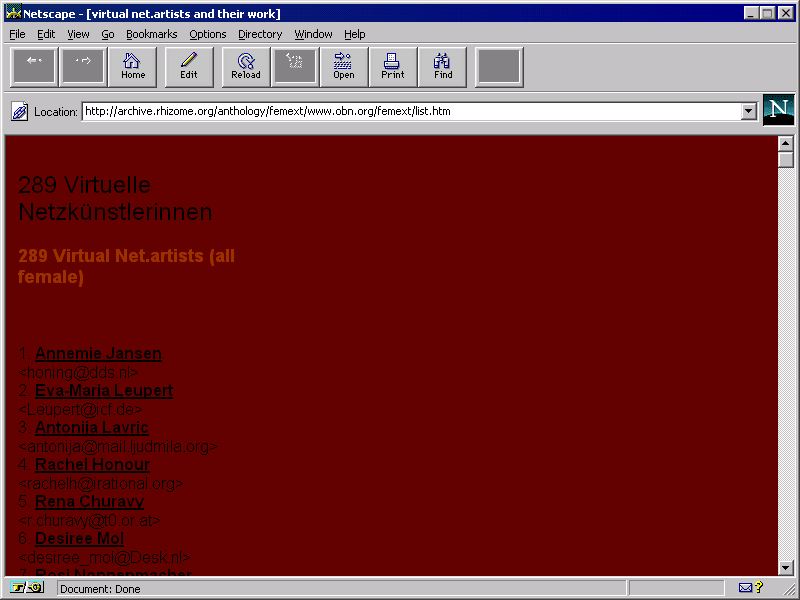 To generate the fake artworks, Sollfrank began by copying HTML from other sites and remixing it, creating what she calls “data trash.” She created unique works for each of the fake identities, but only a few dozen of the entries now survive as part of her online documentation for the project. 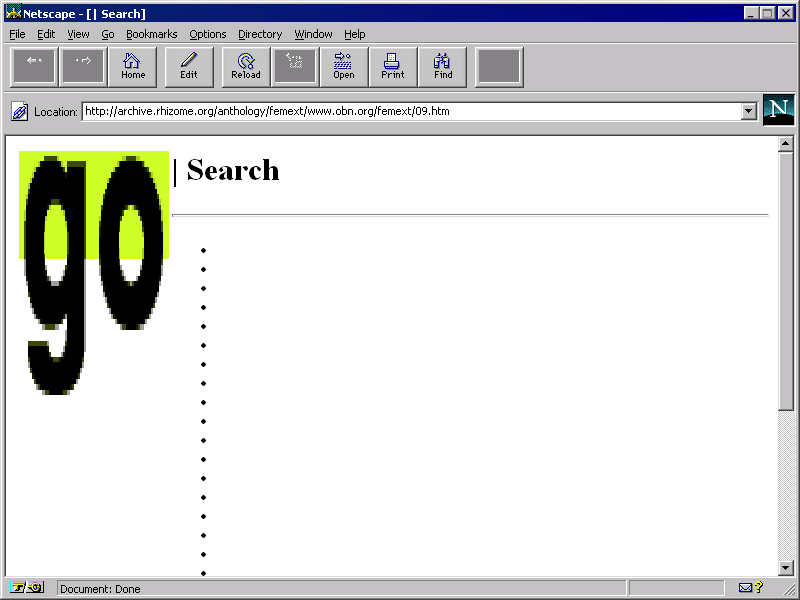 Daunted by the scale of her task, she enlisted help to create a script to automate the process. This automated creation of new works of net art became the basis of her project Net Art Generator, in which four different programmers created automated, recombinant ways of generating HTML layouts. 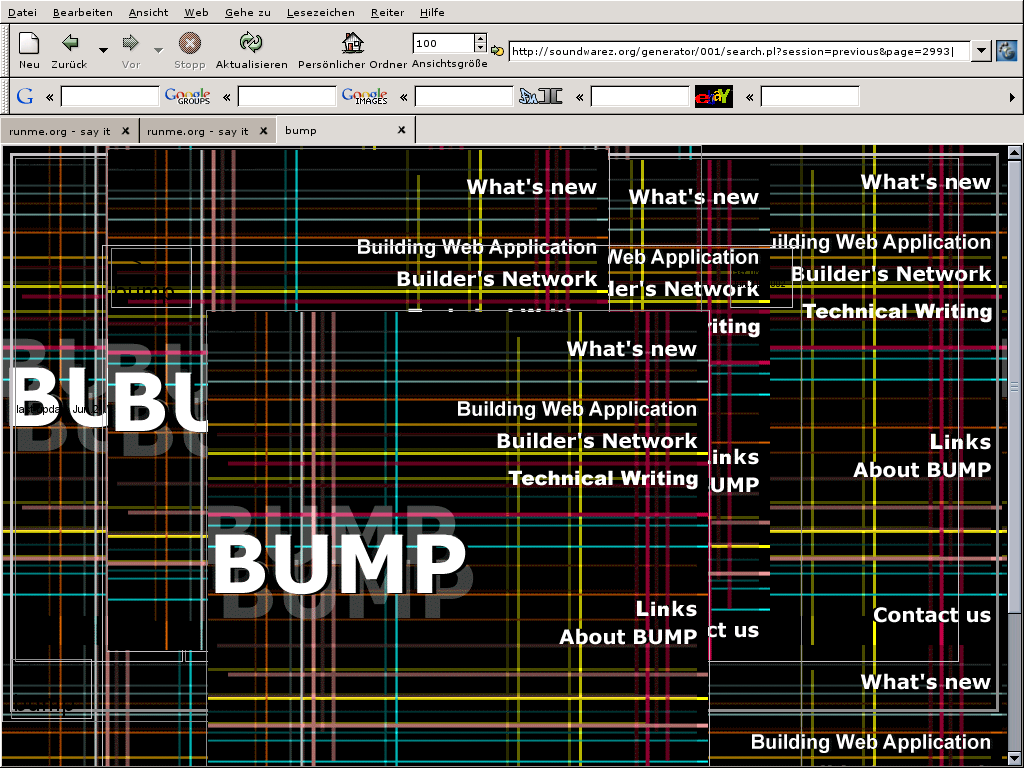 When entries closed, the museum proudly distributed a press release announcing that more than 120 megabytes of net art had been uploaded, with more than two-thirds of the entries coming from women. When the jury met, they reviewed the entries without understanding the intervention that had taken place. The prize was awarded to three projects, all of which had been submitted by men, with an honorable mention going to Christine Meierhofer. 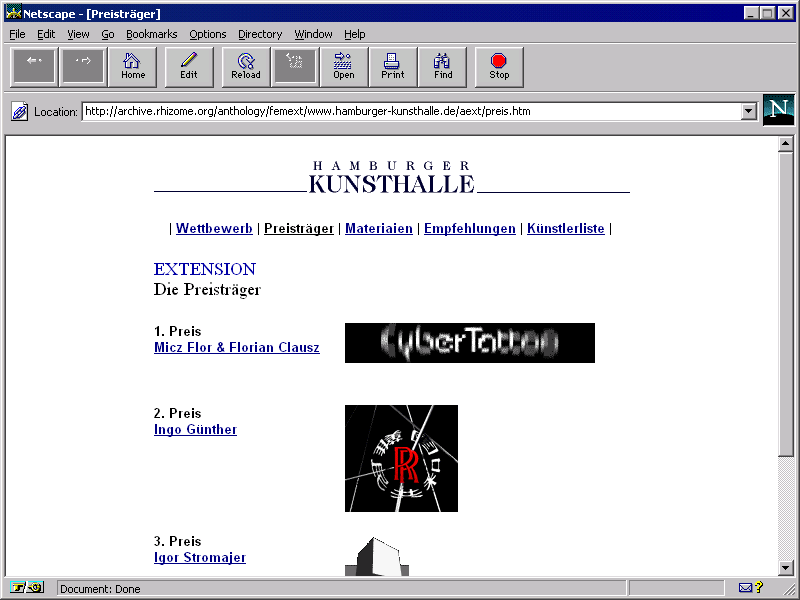 Sollfrank decided to reveal her prank at a press conference for the prize. She distributed her own press release, earning widespread press coverage and admiration from fellow net artists. One German weekly named her “Hacker of the Week.” 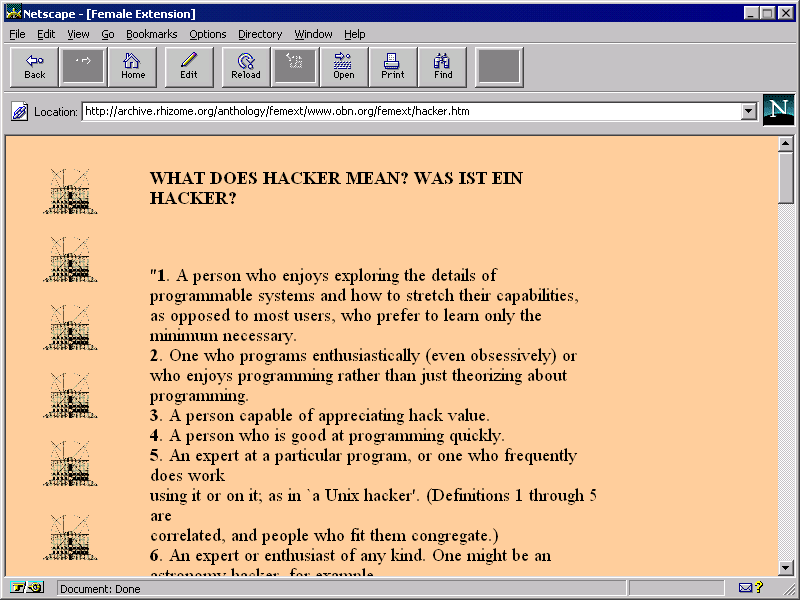 Female Extension is often viewed through the lens of cyberfeminism, because Sollfrank was one of the founders of the Old Boys Network, which attempted to bring a more materialist, pluralist approach to the topic of cyberfeminism. While the project reflects her feminist position, she considers this incidental to its function as institutional critique. 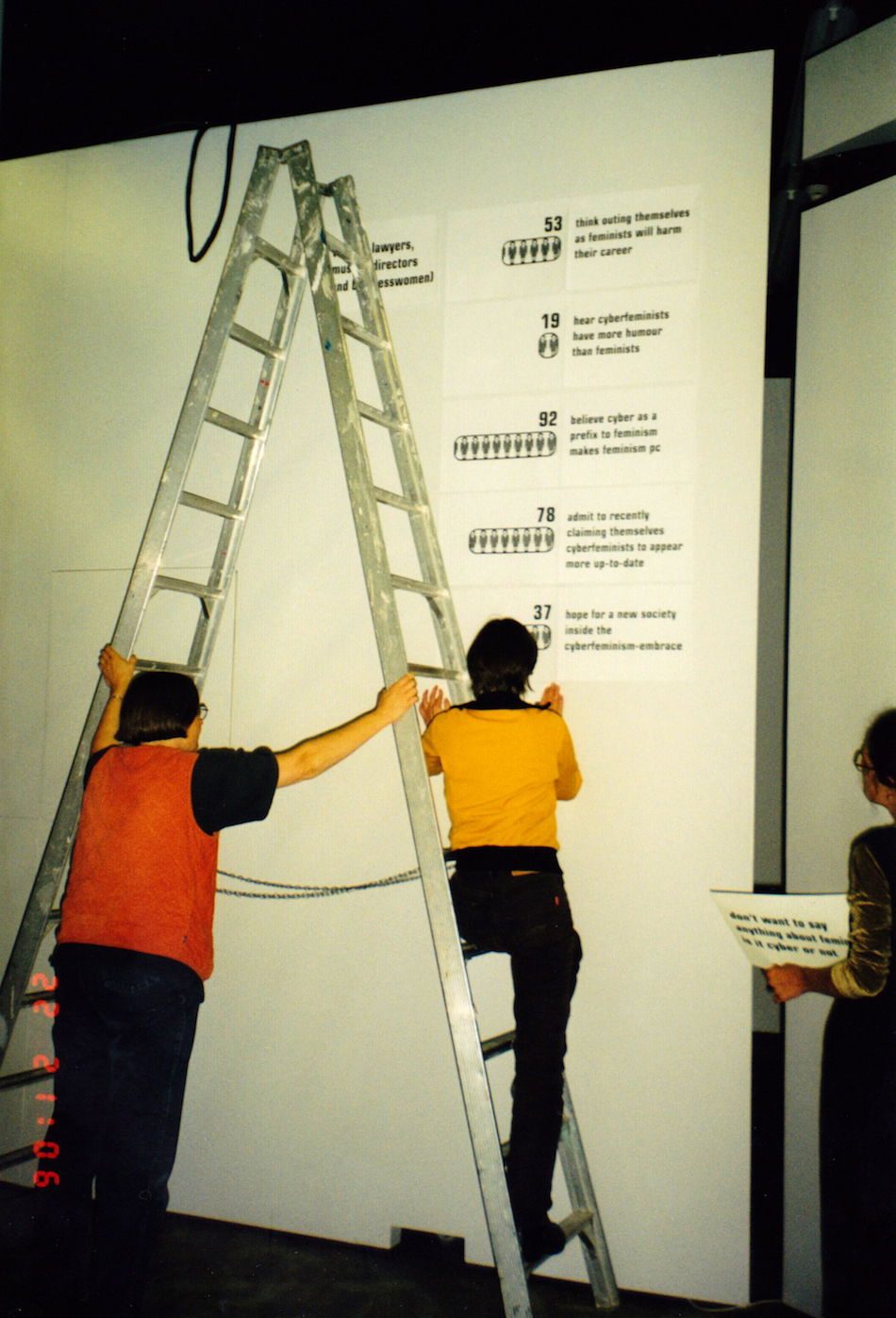 Photograph from the First Cyberfeminist International, part of Hybrid WorkSpace at documenta X, 1997.

Like Vuk Ćosić’s Documenta Done, Sollfrank’s gesture evokes an anti-establishment spirit that is often associated with early net art. However, the reality was more complex. Sollfrank participated in the Hybrid WorkSpace program at documenta X, and found it to be a productive platform. She also understood that not all net artists were opposed to working within institutions. Nevertheless, Female Extension raises a question that still remains unanswered: if artists can create their own contexts on the net, what is the function of the institution? 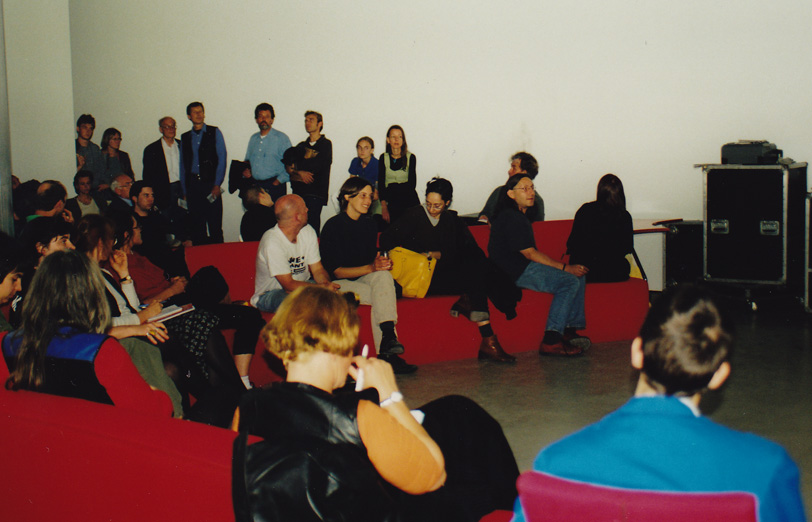 Photograph from the First Cyberfeminist International, part of the Hybrid WorkSpace program at documenta X. 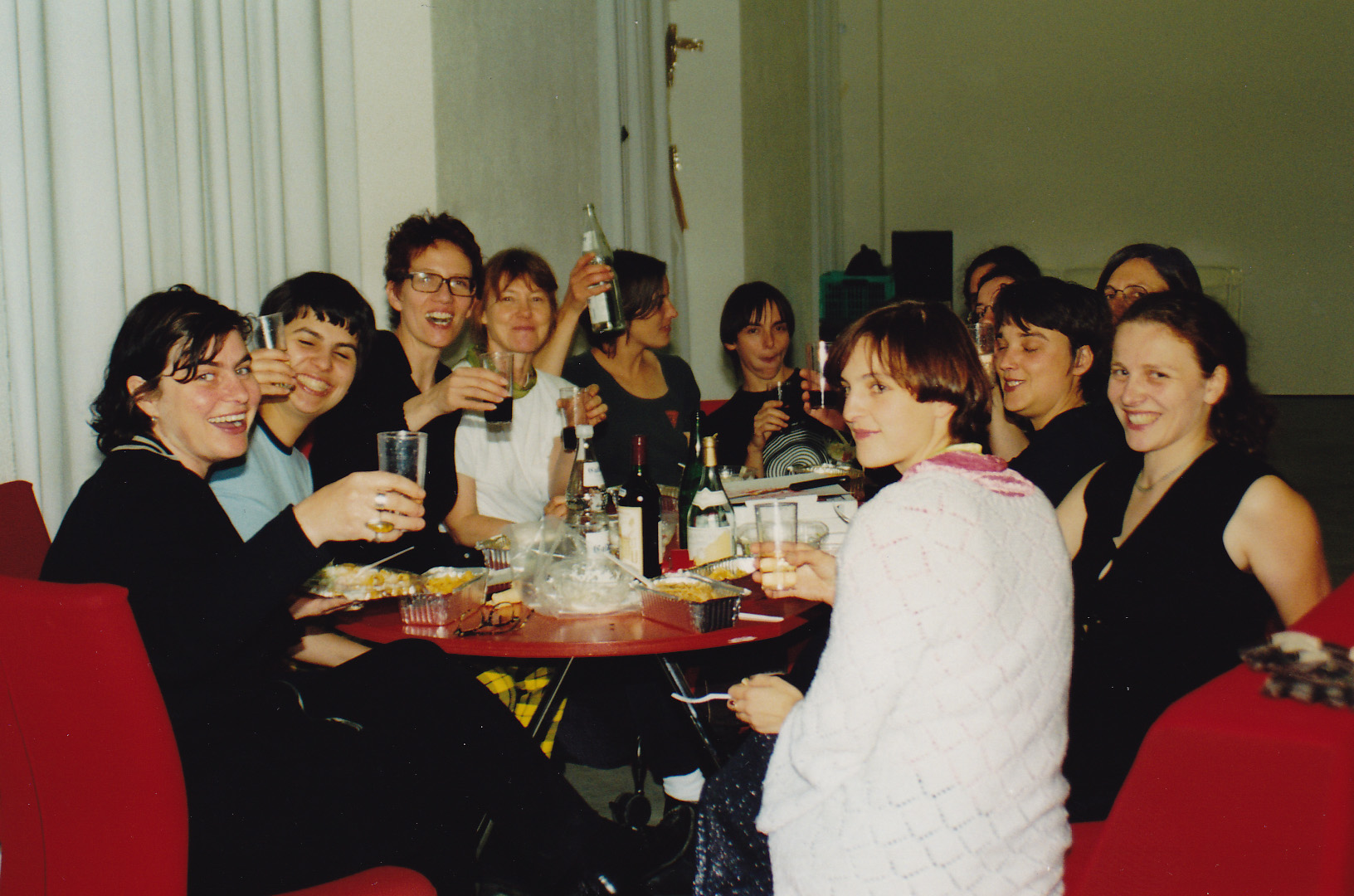 Participants in the First Cyberfeminist International socializing at Hybrid WorkSpace at documenta X.

“One should always be aware of just how elitist and questionable the choices made by a museum actually are.”

Cornelia Sollfrank is an artist, interdisciplinary researcher, and educator. After studying painting at the Academy of Fine Arts in Munich and Fine Art at the University of Fine Arts in Hamburg (1987-1994), she worked for two years for Phillips Media. Since 1998, she has taught at various universities and art schools and written on issues at the nexus of media, art, and (gender)politics.

She was a founding member of the collectives frauen-und-technik (Women and Technology, 1992) and -Innen (1994), and initiated and ran the world-wide cyberfeminist network Old Boys Network (1997-2001), including the co-organization of three international conferences on Cyberfeminism (1997, 1999, and 2001). She founded [echo] – the mailing list for art, criticism and cultural politics in Hamburg (2003), and was co-founder and editor of the online magazine for art and criticism THE THING Hamburg (2006).

In 2005 and 2006, she conceived the culture-political intervention Tamm-Tamm–Artists informing Politicians, involving more than 100 artists. In 2011, Sollfrank completed her practice-led research at the University of Dundee (UK) and published her PhD thesis with the title “Performing the Paradoxes of Intellectual Property.” Since 2012, Sollfrank has conducted research in the field of art and commons. She is the subject of two monographs: “Cornelia Sollfrank - net.art generator” (Verlag für Moderne Kunst Nürnberg, 2004) and “Expanded ORIGINAL” (Hatje Cantz, 2009).

Image of Net Art Generator taken from runme.org; all other screenshots are from Netscape 3 as seen via Oldweb.today.