Mouchette set up her first home page in 1996 and has maintained a constantly expanding web presence ever since.

A fictional adolescent girl, fascinated by suicide and strangers, Mouchette is the long-running work of Amsterdam-based artist Martine Neddam. Her labyrinthine, ever-growing site makes use of expressive HTML elements to involve the viewer in the turbulent emotional world of an adolescent girl. Participation is central, and visitors are encouraged to talk about suicide, contribute fan art, and even adopt Mouchette's identity.

As a character who doubles as a platform for exchange, Mouchette has for two decades provoked her visitors into contributing in their own ways to a site that now stands as a singular and important archive of online culture—humorous, dark, and often surprisingly touching.

“The works had that sort of here and now encounter. That thing was always open, twenty-four hours. It was all the time live.”
– Martine Neddam

Mouchette’s personal website, hosted at mouchette.org, is by now a vast trove of pages. Neddam continues to spend hours per week keeping it up to date, adding new works, moderating comments, and fixing deprecated code. Liveness is crucial to Neddam’s practice, so the work featured in this online exhibition is a direct link to her live site.

Read "A Girl Made of Language" by Michael Connor on Rhizome.

An earlier point in Mouchette's trajectory can be glimpsed in Mouchette’s contribution to the web zine Why Not Sneeze? in 1997, also presented here. The page is covered with small pebbles and crawling ants, who seem almost to crawl on the viewer’s screen. Suggestive phrases like “a little further .....” encourage the visitor to "touch" the screen with the mouse in search of a hidden link.

Visit partial copy of 1997 work from Why Not Sneeze?

One transparent gif on Why Not Sneeze? links back to Mouchette’s profile page, which drew on and amplified the playful kinds of self-presentation on the early web. Her bio, unchanged since the beginning of the project, expands on the classic internet mantra of Age/Sex/Location, but not by much. “My name is Mouchette. I live in Amsterdam. I am an artist. I am nearly 13 years old.”

Mouchette's profile page from Why Not Sneeze? web zine, 1997.

At that time, Mouchette's own site also offered links to several multi-user virtual worlds that she frequented, including instructions for finding her, or an interactive bot that she created. She directed visitors to text-based worlds called MOOs and to a pictorial one known as ThePalace.

"Here, I am in ThePalace, in the court room. I chose this room because it is the only one which has a computer."

The text-based and programmable environment of the MOOs had a deep influence on Neddam, who has described her character as a “little girl made of language and made of text.” Early in the Mouchette project, Neddam built on this interest, using computer software to create nonsense words, from which Mouchette composed poetry.

Participation was also central to the project from the beginning. Contributions from the public, via CGI form or email, were as important to Mouchette's identity as any text written by Neddam or by computer software.

One of the most active discussions on Mouchette's website was on the topic of suicide. “What is the best way to kill yourself when you’re 13?” Mouchette asked in 1997, inviting users to respond via a form. This discussion grew rapidly and changed as the web did. When it launched in 1998, it was a frank but sardonic conversation with an arts audience, but by 1999 it had become an increasingly urgent discussion of a social fact which had few other public arenas.

In addition to serious discussions, users also submitted fan art, including net art works and comics featuring Mouchette. In 2003, Neddam expanded fan involvement by launching a new site, Mouchette.net, which allowed visitors to claim the identity of Mouchette, altering her personal website and sending email from her address.

Fan art from Mouchette.org with the caption, "Mauro Pereira sent me this photo of his son as a Xmas 2000 present."

Throughout the project, Mouchette promised many public appearances, but never actually materialized. In 1997, her appearance at the Triple X Festival in Amsterdam was announced, but in her stead she sent René Paul Vallentgoed, an agent who represented poets for live readings. In a much-heralded appearance at Postmasters Gallery in New York, Mouchette revealed herself to be a "very polite Frenchman." 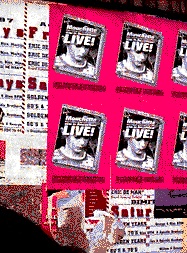 The anonymity of Mouchette’s creator was carefully maintained for more than a decade in order to allow more space for visitors to invent the character in their own way. This anonymity particularly fueled debates about the sexualization of adolescent girlhood in the project. Mouchette invited visitors to “taste her tongue” via the screen and laced many aspects of the site with references to sex, rape, and incest.

Mouchette’s subjectivity comes across most through the design of her site. Images, often created with a flatbed scanner, seem to press up against the surface of the screen, with detailed textures of skin, flowers, and meat, as well as swarms of insect gifs creating an ever-present sense of decay.

For Neddam, the loading of a page is a performative event, often marked by a sound such as a coyote’s scream or the moaning of a young girl.

Thus, Mouchette is above all a performance by ensemble, linking together artist, public, and the technical apparatus.

"The web character is not so much a portrait as a platform with a certain design...to find a situation where people exchange with each other inside that character." – Martine Neddam

Martine Neddam is a visual artist who has been working with internet virtual characters who lead an autonomous artistic existence in which the real author remains invisible.