Spirit Surfers is a “surf club,” which can be defined as a “group artist blog where the prevailing subject is internet culture and aesthetics and where lines are blurred between the roles of artist, curator, and archivist.”

Co-founders Kev Bewersdorf and Paul Slocum invited their peers to contribute to the Wordpress site, uploading images collected while wandering the net. Sharing found materials out of context, the contributors to Spirit Surfers found the miraculous and the absurd in everyday web content, bringing a kind of of “comic spirituality” to the surf club ethos.

“The oracle told me that a surfer would snag the sister domain once it was cut loose, and that this surfer would be a chosen one.”

The term surf club was coined by the creators of a group blog called Nasty Nets, which, as Paul Slocum has argued, partly “defined the surf club form as one that catalogs oddities and minutiae of the internet with a certain kind of dry humor.”

Bewersdorf and Slocum were members of Nasty Nets, and they founded Spirit Surfers- using grant money provided by Glasstire–out of a need for their own platform.

Spirit Surfers’ format was like that of any other surf club for the most part. Members made individual posts, which then were accessible in the blogroll. Clicking through to the main post would sometimes lead to further imagery. Every post had a comment section at its end; the more comments the better.

“While a more traditional blog is a journal of an individual artist, who posts images of his/her work, research and thoughts, a surf club imposes certain practice dynamics, which is conducive to a very fast-paced conceptual exchange based on treatment and analysis of online material, or using the online material as a base of any kind of investigation.” - Marcin Ramocki, Surfing clubs: organized notes and comments, 2008

From the outset, members’ posts were to be organized into two categories: “boon” and “wake.” Over time, each of these categories came to mean something different to all of Spirit Surfers members.

At the beginning, however, the two categories were meant to represent two different kinds of internet objects collected in the surfing process. The boon is a “worthy gift” discovered when surfing the web, and “it is the ability of the great surfer to recognize his arrival at [it].”

“Rothko made from two doormats.” Posted by INFOpruner, March 19, 2009. Screenshot.

“The boon is revealed at the eureka moment of a surf when the surfer becomes enlightened by the INFOspirit.”

The other category, the wake, was designated for images and objects that “try to provide insight on the process that [led] to [a] boon.”

In his essay “Spirit Surfing,” Bewersdorf discusses these categories and the important notion of framing when it comes to surfing the web. Otherwise unremarkable content can become diamonds in the rough when carefully framed in the context of the surf club’s scroll. 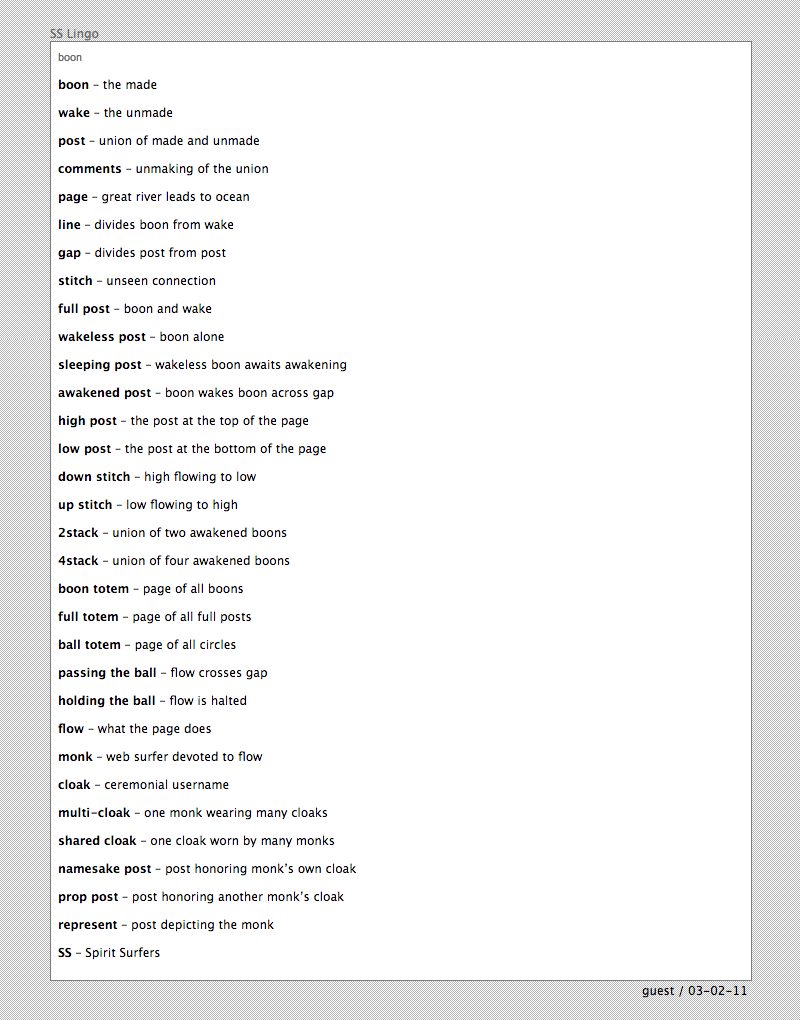 For the members of Spirit Surfers, the act of web surfing was process-oriented, a practice toward communing with the internet itself. Bewersdorf wrote: “the greater masterpiece is the infoSPIRIT that constructs all of Google.”

Discussing the internet as a sacred force in this way has a comical aspect, which the founders of Spirit Surfers were not unaware of.

Surf clubs emerged at a moment when blogging software became widely available, but internet culture was not so thoroughly dominated by corporate platforms. Spirit Surfers is unique for its continuous activity over the past ten years.

Even when Bewersdorf famously deleted most of his online presence in 2009, replacing it with a steadily diminishing image of a candle, the blog quietly continued.

Today, even as platforms’ demands become increasingly onerous and users’ behaviors increasingly scripted and manipulated, Spirit Surfers remains true to its founding purpose, highlighting the way in which internet culture continually exceeds rationalization, and finds the miraculous within the everyday.