The Revolving Internet is one in a series of browser-based works by artist Constant Dullaart that animated the iconic Google search page, drawing attention to the infrastructure that framed most users’ experience of the internet. By adding animation to the Google interface but retaining its functionality, Dullaart’s formalist experiments cheekily questioned the platform’s growing power.

A steadily rotating version of the Google home page, The Revolving Internet is soundtracked by Dusty Springfield’s “Windmills of your Mind,” heightening the absurdity of the experience. Through this deceptively simple intervention, Dullaart reached a broad public while prompting users to consider their growing reliance on platforms. 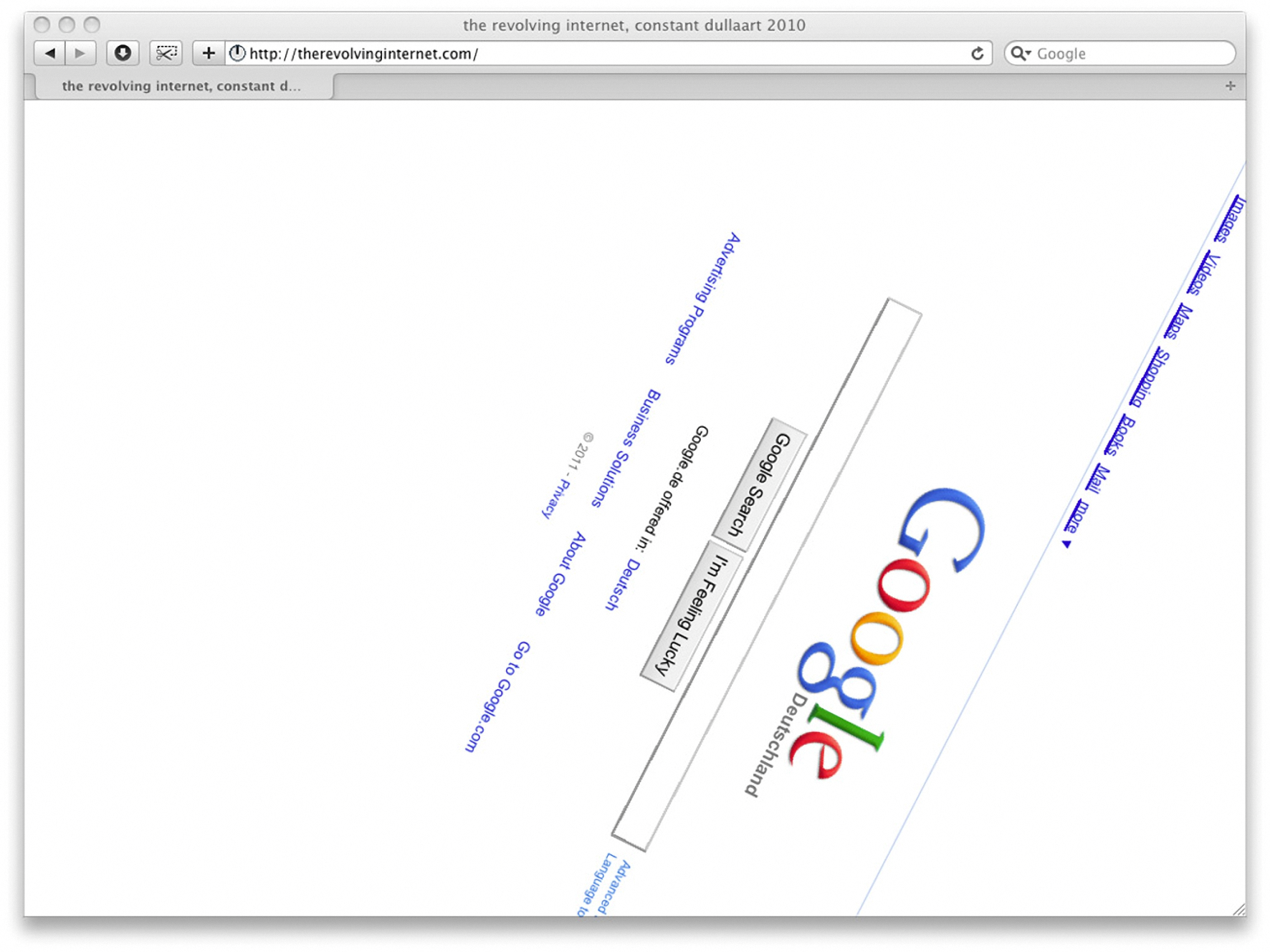 “The Revolving Internet is a performative piece, a collage of found material [that] exists within the context and parameters of the internet, which is in continuous evolution.”

Visit website
Shown from the live web. Best in Firefox.

Constant Dullaart first began to incorporate the internet into his artistic practice after missing an episode of Cheers, which was broadcast on Dutch television in the early 2000s. He tried, and failed, to find it online, but instead found the kind of everyday internet content that was typical of the web before social media.

For Dullaart, this was the internet at its most democratic: users creating content to fill an immediate need in their lives, unbothered by metrics. But by the time The Revolving Internet launched in 2010, users had increasingly moved to centralized platforms and become more attuned to attention economy dynamics. The direct approach to content creation that Dullaart particularly appreciated had become much rarer.

In response to these conditions, Dullaart created a series of works that altered the Google search interface through subtle manipulations. The first was The Disagreeing Internet, which embedded the interface in a marquee tag, moving it back and forth. The work involved a juxtaposition on the code level, by framing the complex workings of the search engine within an HTML tag that was a holdout from the early web.

Perhaps the most unsettling intervention from this series, and the most complex, was The Revolving Internet. Dullaart had set out to create a page that would rotate Google’s page 360 degrees, a gesture toward a particularly difficult camera movement in cinema.

“All these works display a simple, single behavior,” wrote Domenico Quaranta of this series. “They all deal with the home page of Google, which remains fully functional despite its unorthodox appearance. Whether you first read the domain name, or first focused on the content of the page, when you put them together you get the joke, and you probably smile. And then? Then you leave, maybe a bit disappointed (especially if you where told that this is a work of art), but also richer in a way. You now know, consciously or unconsciously, that Google is not God. That Google is not the absolute, untouchable, clear thing it pretends to be. It censors, and can be censored. It can be displayed upside down. It can disagree, doubt and sleep. The Revolving Internet is like Andersen’s famous tale, “The Emperor’s New Clothes”: when you read it, nothing really changes, except your perception of those in power. Maybe your king is naked, too.”

Read an interview with Constant Dullaart

Dullaart viewed The Revolving Internet as a formal experiment in the tradition of earlier media artists like Nam June Paik, whose work made visible the infrastructures of new mediums of information transmission through simple material interventions.

By introducing rotation into the interface, Dullaart made browsing Google quite difficult; some said it was hypnotic, others nauseating. 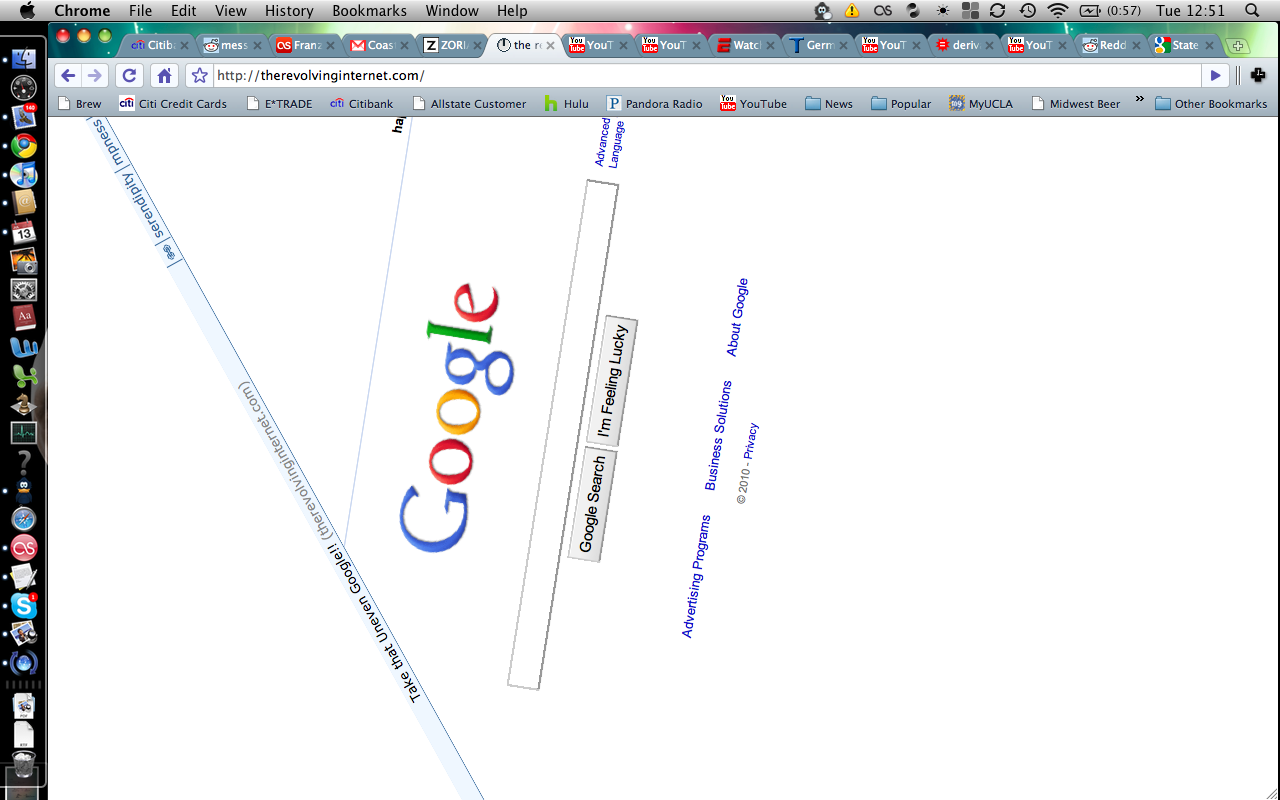 Screenshot of The Revolving Internet from a user in 2010, via imgur.

The Revolving Internet reached a significant audience, and not long after the site’s launch, Google introduced its “do a barrel roll” feature, where if a user entered “do a barrel roll” into the Google search bar, the page would rotate–though only a single time. Soon afterward, Google removed the iframe capability, rendering Dullaart’s project temporarily nonfunctional–until a workaround was devised.

“It felt like a sequence from an art movie or something. It was just so poetic,” wrote one user after visiting Reddit via The Revolving Internet. “I swear it was like I was experiencing it both first hand (as myself) and third hand as an objective audience observing me and making connections between me and the revolving reddit screen.”

Deceptive in its simplicity, Dullaart’s The Revolving Internet subverted the interface that itself framed most users’ experience of the internet. It was a formal gesture, but it reflected Dullaart’s ethos that users and their valuable online labor and attention were poorly served by corporate platforms.