Founded in 1994 by entrepreneur John Borthwick and curator Benjamin Weil, äda 'web was a platform for online artworks, experimental literature, publishing, and even exhibitions. It functioned within an internet startup as a “digital foundry” that commissioned artists to work directly with web designers and developers to explore the internet as medium and distribution channel.

This collaborative approach allowed äda 'web to diverge from conceptions of net art as a distinct field of practice: it included works from artists who focused on digital media and from artists for whom net engagement was a welcome extension of their conceptual practice.

“Together, we invited artists to experiment with—and reflect upon—the web as a medium as well as a means of distribution for their work.” — äda ′web

Taking its name from Lady Ada Augusta Lovelace, who is often described as the first computer programmer, äda 'web commissioned and hosted an extraordinary range of experiments with the internet’s form and function.

Jenny Holzer’s Please Change Beliefs (1995) allowed users to modify a selection of her aphorisms, and became a sensation on the early web. 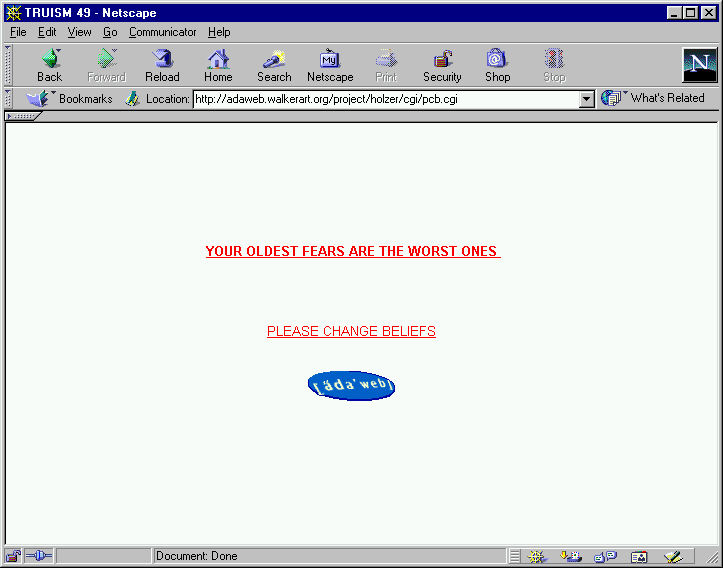 Ben Kinmont’s We both belong (1995) was based on on- and offline exchange: users would submit photos of themselves washing dishes via the internet, and the artist would return the favor, in printed form.

After WP Studio was purchased by AOL, the site lost its financial support. In late 1998, it was archived by curator Steve Dietz on behalf of the Walker Art Center.

Although äda 'web was conceived of as a curatorial platform bringing together a range of different works and activities, it is most valuable to consider as a whole, rather than extracting an individual work.

It was both an early experiment in the web’s utility as an artistic medium and platform and a bellwether for the challenges of translating an active platform into an archival object.