Kit Galloway and Sherrie Rabinowitz’s early collaborative work, which took place under the moniker Mobile Image, imagined “new ways of being-in-the-world” that would be made possible by multimedia telecollaborative environments.

The duo developed a series of ambitious projects that brought communities and publics together to express themselves across geographical distance. These included Satellite Arts Project (1977), which connected performing artists in multiple locations to create live dance and music together via satellite; Hole in Space (1980), which connected people on the streets of New York City and Los Angeles through a vivid, streaming video installation; and Electronic Cafe ’84 (1984), which initiated a network of computer terminals in cafes throughout diverse neighborhoods in Los Angeles, becoming a decades-long multi-site project.

Coming from a background in video art, Galloway and Rabinowitz foresaw a world of increasing reliance on telecommunications infrastructure. Moving away from single channel work to tackle more structural questions, they sought to critique corporate and government control of telecommunications and model the social and cultural possibilities of networks for the people.

In 1976, NASA invited members of the public to submit proposals for experiments to be carried out via satellite.

Galloway and Rabinowitz were living in France at the time, where they had been introduced by philosopher Félix Guattari. Both artists shared an interest in telecommunications infrastructure—not just what is communicated, but how it is communicated—and they built a partnership in life and work.

While in France, the duo began to conceptualize what interaction across distance via satellite transmission might be like. However, they had failed to gain access to the technology itself. When the NASA open call was issued, they left for the US and began working on a proposal for artistic experiments to be carried out via satellite.

Part of this proposal was realized as Satellite Arts Project (1977), which used telecollaborative dance and music to consider ways of relating via two-way satellite over long distance. 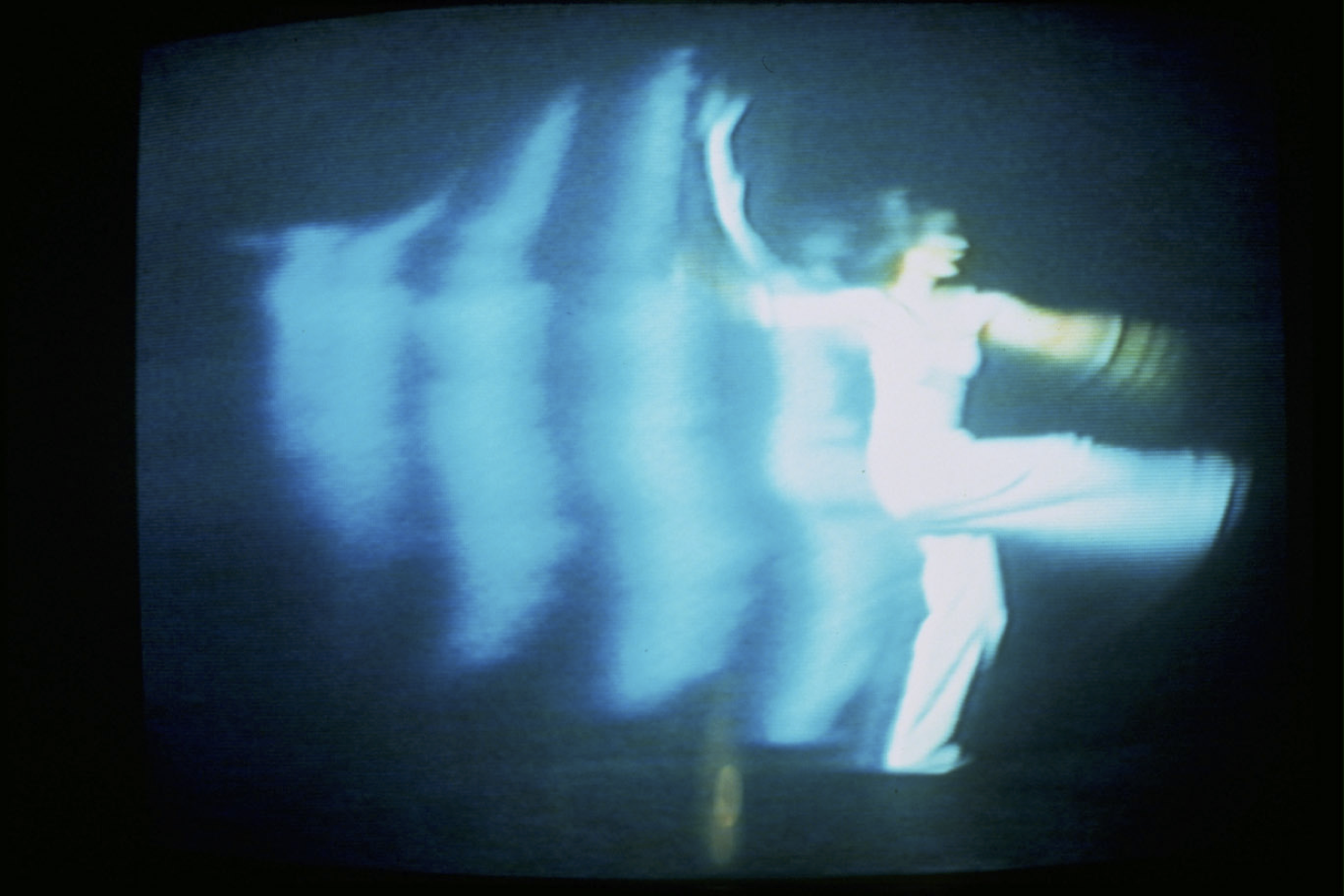 One particular question that was of interest to the artists was whether the time delays introduced by long-distance satellite transmission – in this case, 1/4 of a second — would make collaborative live performance impossible. Galloway and Rabinowitz developed timing exercises and ways of playing with the delay to generate sonic and visual effects.

Following extensive storyboarding of ways to represent remote participants joining together onscreen, Galloway and Rabinowitz settled on strategy of creating composite images at each location, with the on-site dancers joining their long-distance counterparts in a hybrid onscreen space. Galloway & Rabinowitz referred to this as “The Image as Place.”

After months of rehearsals, Satellite Arts ultimately took place across four days, with performers at the Educational TV Center located on the grounds of the Catholic Archdiocese in Mountain View, California and the NASA Goddard Space Flight Center, Greenbelt, Maryland, linked by NASA satellite.

“Satellite Arts... set up what the artists considered ‘alternative social worlds as laboratories for resocialization’ as places for experimentation and retraining, for repurposing mass media “as technologies of the self...” – Philip Glahn and Cary Levine 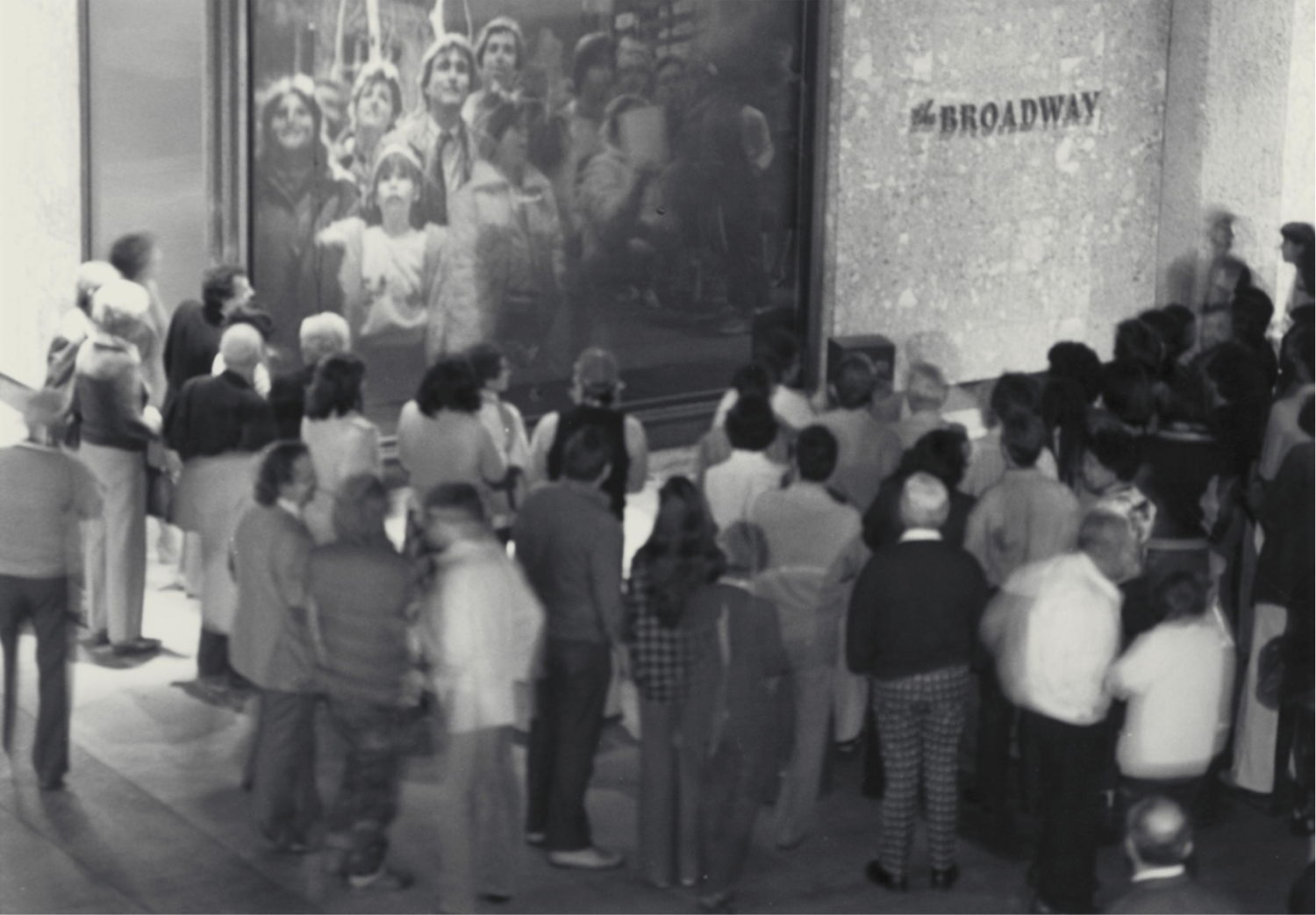 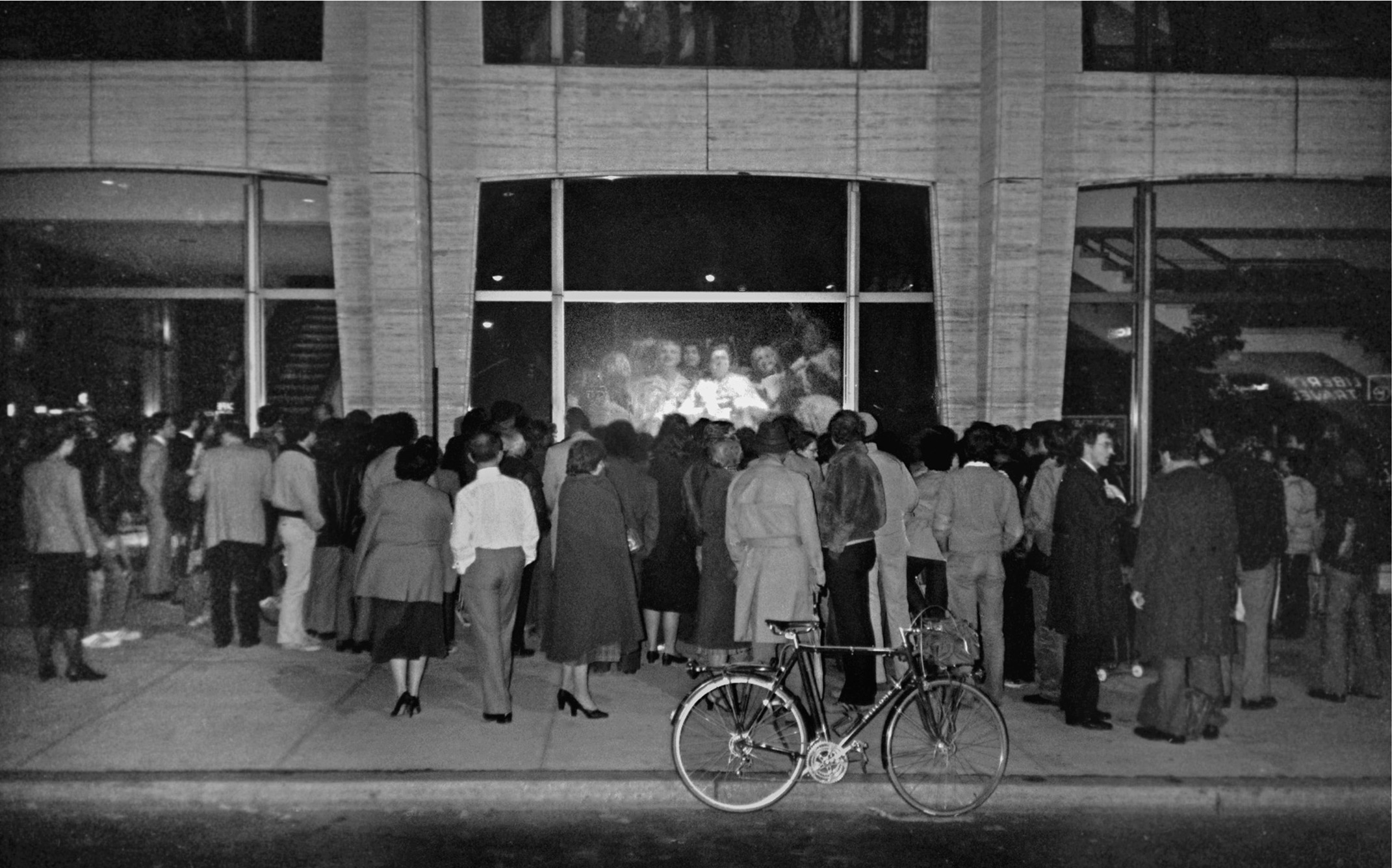 Hole in Space (1980) offered a life-sized, real time videoconference connection between public spaces in New York and Los Angeles. Over three November evenings, crowds gathered to socialize with strangers across the country, or to have pre-arranged meetings with loved ones.

Infrared camera installed below life-size projection screens, along with microphones and sound systems, created a live “Public Communication Sculpture” that linked the Lincoln Center for the Performing Arts in New York City and The Broadway department store at an outdoor shopping center in Century City Los Angeles. Participants couldn’t see their own image, only that of their counterparts across the US.

The installation was entirely unannounced,with no accompanying signage or instructions, which allowed audiences to develop their own understanding of how to inhabit it.

“There was the first evening of surprise discovery; the second evening was populated by word-of-mouth and long distance telephone calls; and after the television coverage of the second evening, the third was like a mass televisual migration of families and trans-continental loved ones, some of which had not seen each other for over twenty years.” 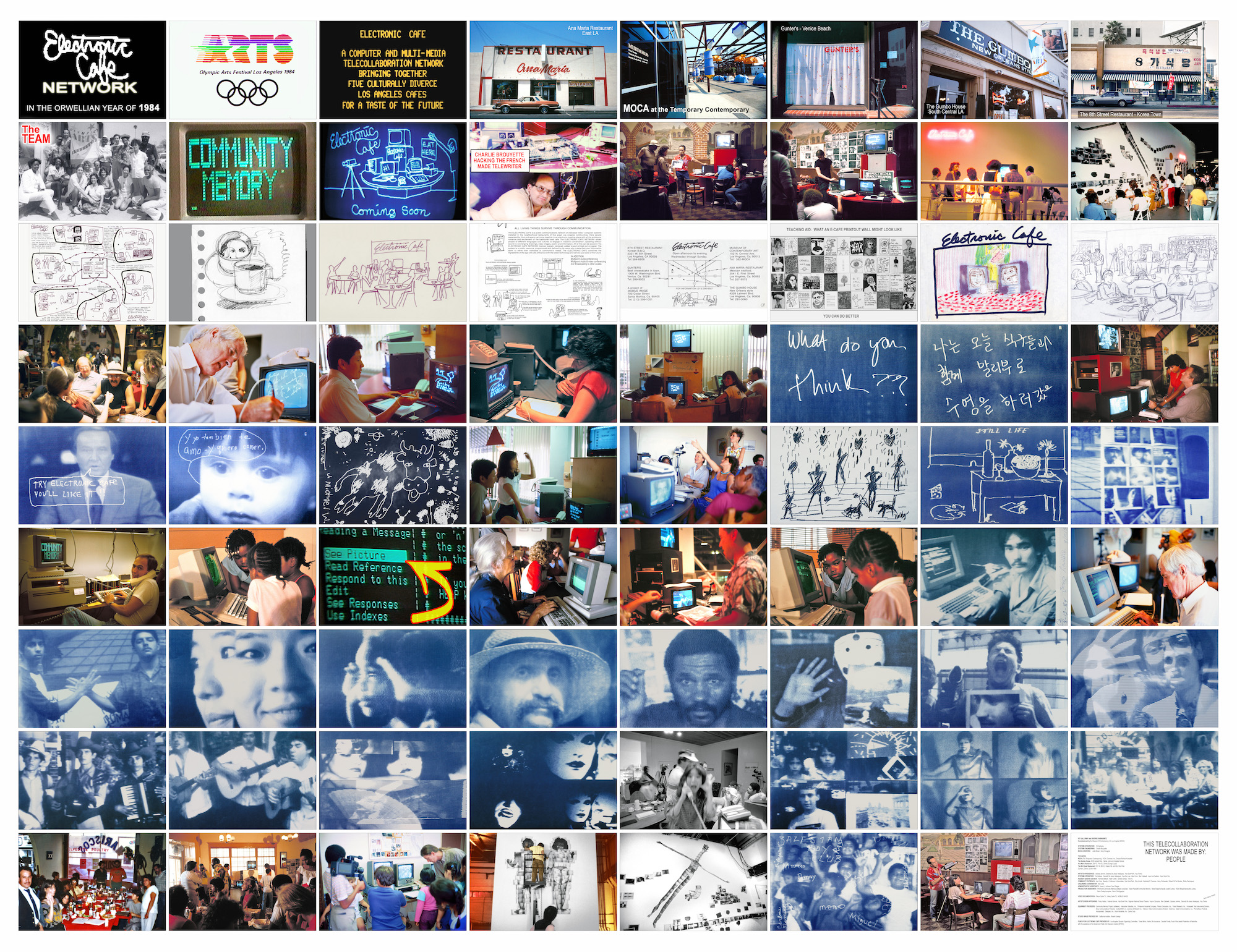 “WE MUST CREATE AT THE SAME SCALE AS WE CAN DESTROY”

Staged alongside the 1984 Los Angeles Olympics, Electronic Café ”84 offered networked computer terminals and other more inclusive high-tech audiovisual tools at the Museum of Contemporary Art as well as eateries with deep roots in four distinct communities: The Gumbo House in the predominantly African-American community of South Central, Ana Maria Restaurant in the Latinx enclave of East LA, The 8th Street Restaurant in Koreatown, and Gunter’s Cafe in Venice Beach.

Drawing on the long history of cafés as institutions that foster community, revolution, and social justice, Electronic Cafe ’84 aimed to give people agency in shaping the networked world to come, rather than having it decided for them.

A key part of the project was an extension of Community Memory, a text-based bulletin board system that had been founded in the Bay Area in 1973. Community Memory had long served as a digital resource where the public could store and retrieve messages, exchanging ideas and information via terminals in public spaces such as coffeehouses.

Because their public would not necessarily share a language or literacy skills, Galloway and Rabinowitz led a ground-breaking effort to add support for images as part of Community Memory.

“Electronic Café came closest to realizeing our vision for Community Memory – a network of neighborhood information excahnge points enabled with multiple media and open to all comers on an ongoing basis. It can still be done!” – Lee Felsenstein 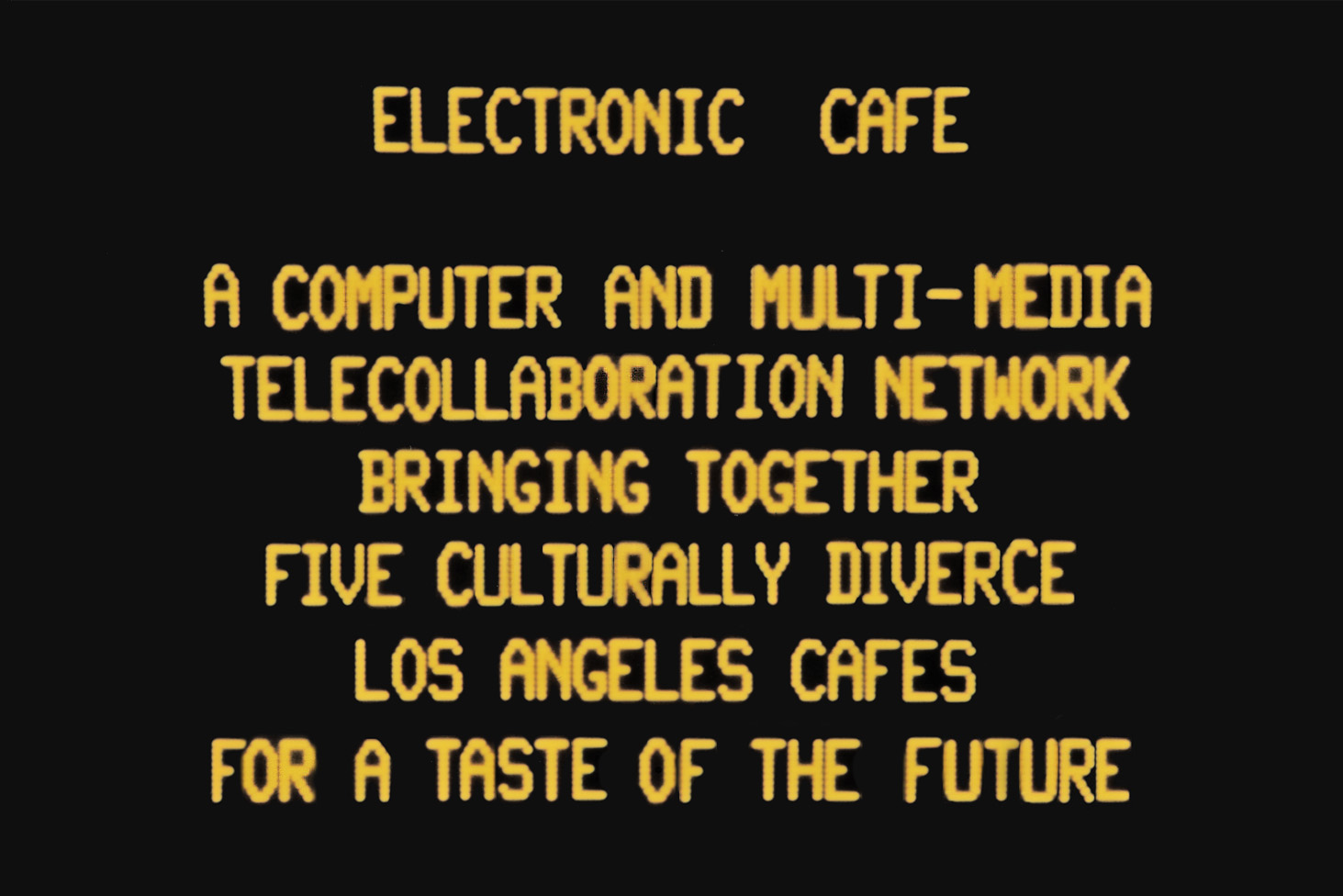 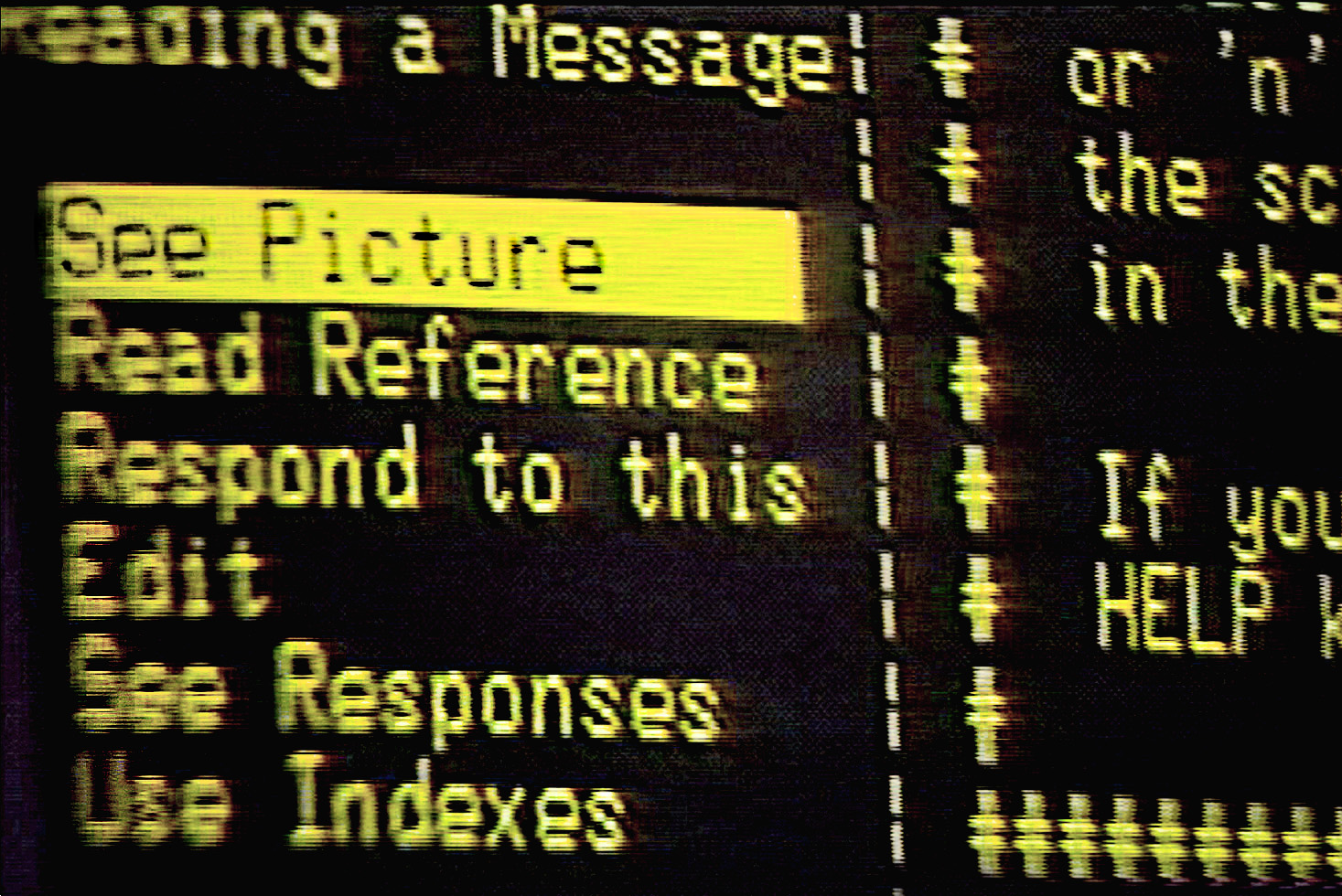 At each node, innovative systems were installed that extended and combined available technological tools to suit community needs. Visitors could annotate still video images, draw or write together in any language with an electronic writing tablet, share their screen to collaborate with visitors at other sites, print hard-copy pictures, and send and receive slow-scan video images. 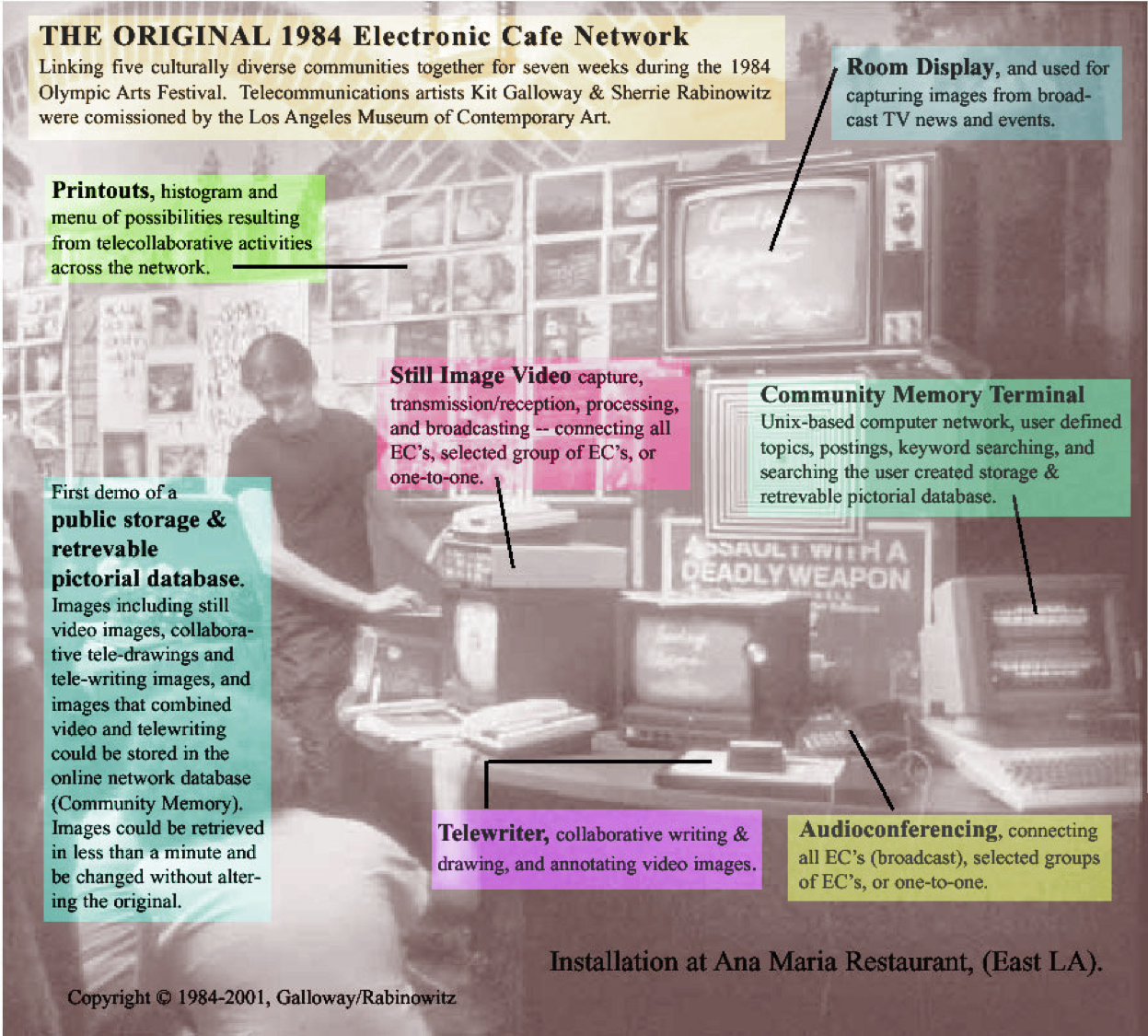 All of this visual output could be stored or retrieved on Community Memory’s videodisc recorder, which held 20,000 images. 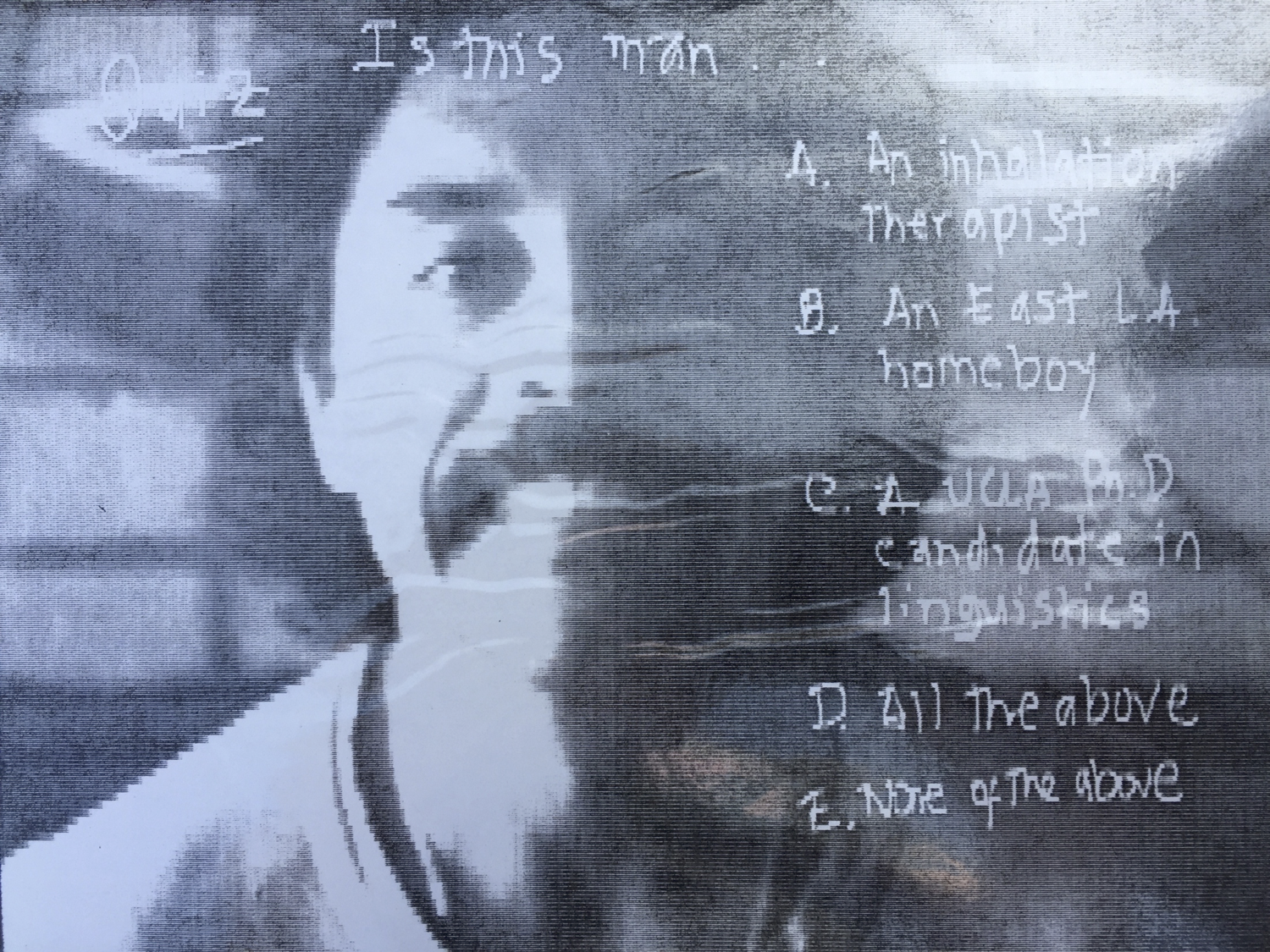 A still image from SSTV (slow-scan television) captured and annotated at Ana Maria’s Restaurant in East LA, where Juse Luis Sedano worked as a facilitator.

Participants could exchange and annotate images over the network, sometimes layering one image on top of another. Events were held linking multiple nodes; troubadors from East LA performed for audiences around the city, and a poetry slam linked feminist poets in Venice Beach with black radical poets in South Central. 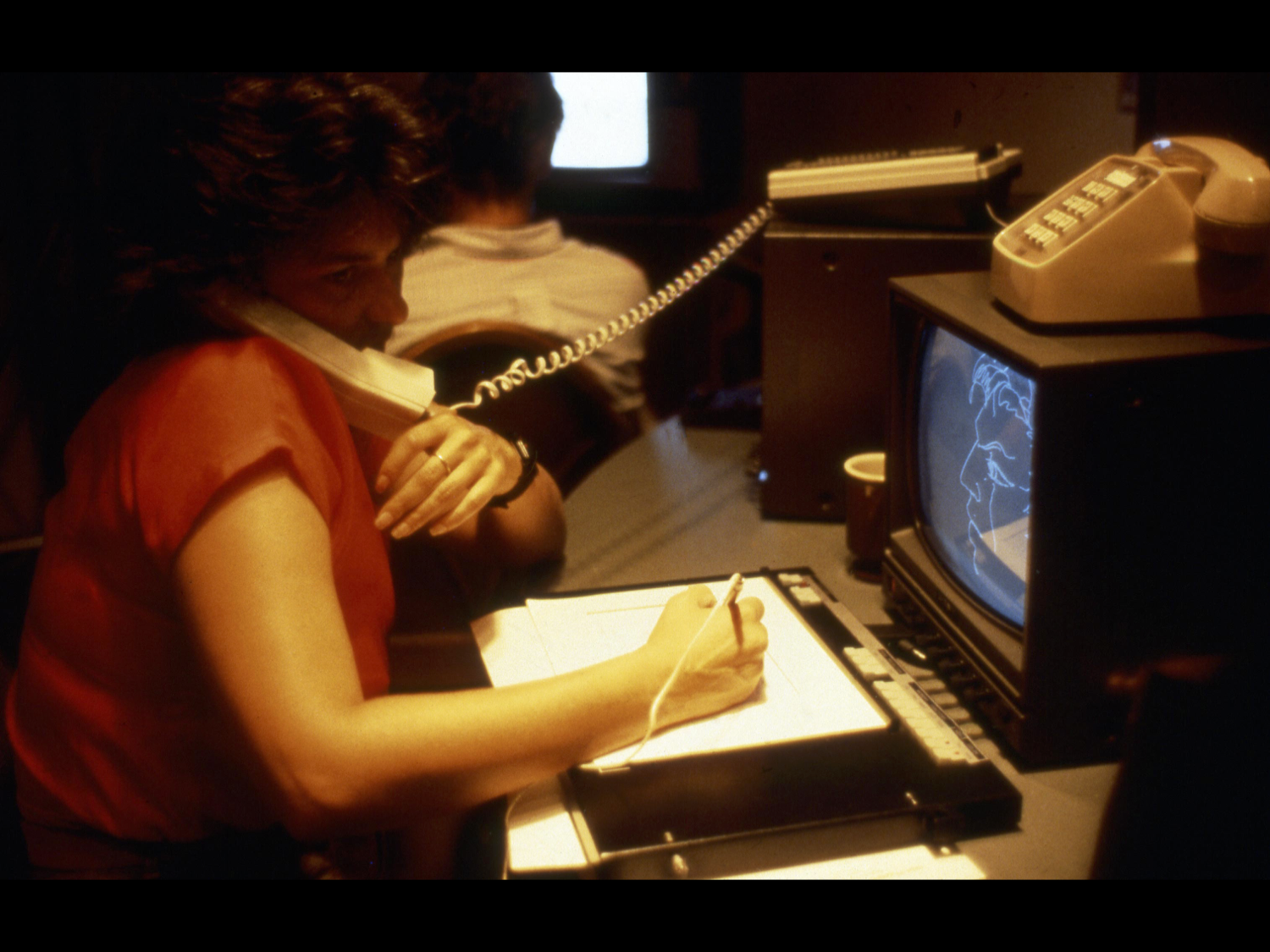 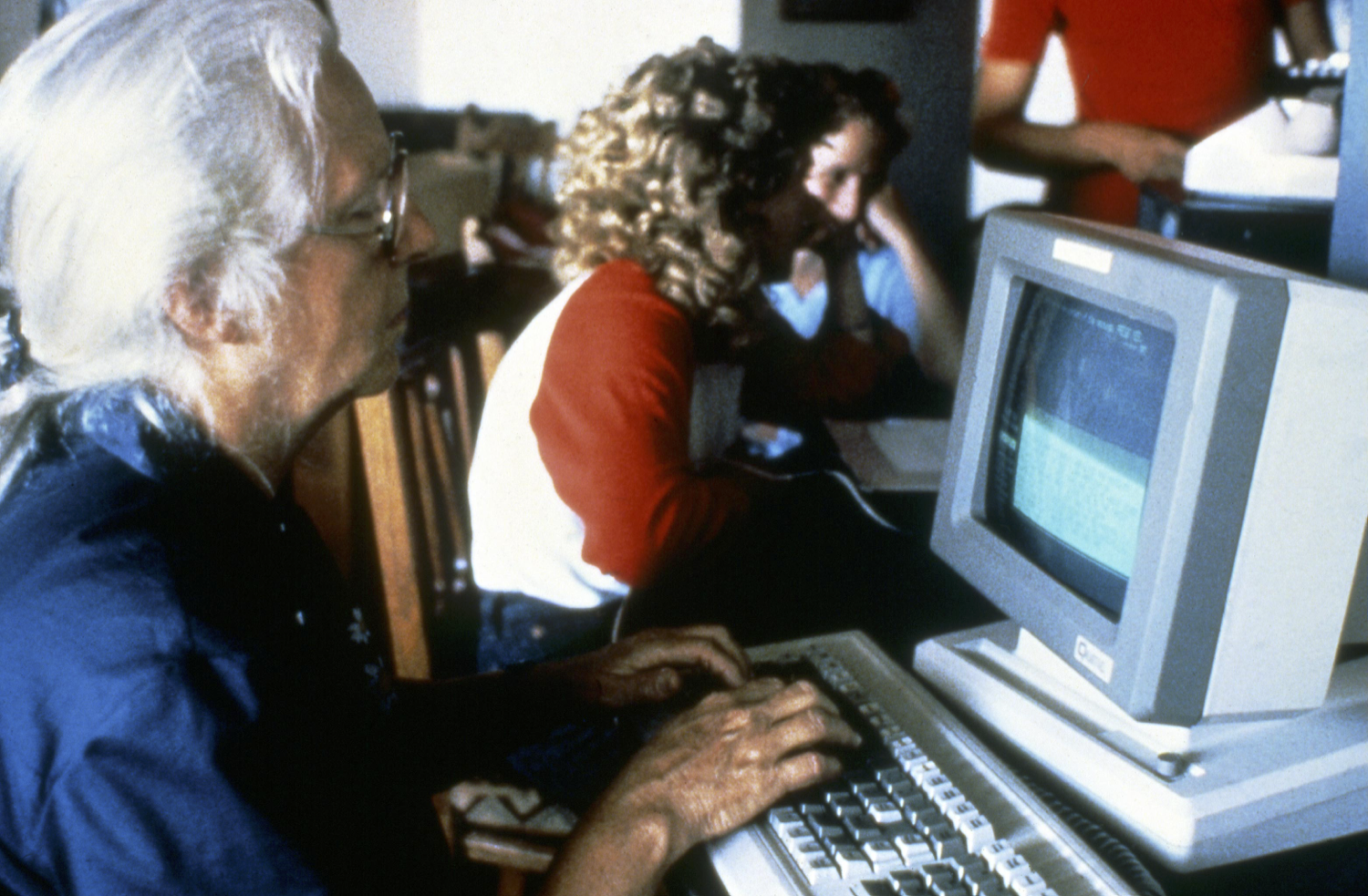 FrancEyE aka Frances Dean Smith, an organizer of poetry events on Electronic Cafe ‘84.

The artists saw Electronic Cafe ’84 as a cultural commons, a platform through which people could engage in “the world changing power of creative conversation,” freely and (if they so wished) anonymously.

“Consider: co-creating non-imperialistic, multi-cultural, or domestic agendas for community or global scale aesthetic endeavors. Consider: the continuous re-invention of non- hierarchical telecom networks that will allow people to bypass cultural gatekeepers and power brokers. We must accept these kinds of challenges and recognize what can be gained by solving them.” —Electronic Cafe manifesto, 1984

Electronic Cafe ’84 at MOCA, Los Angeles. Printed images created by participants and shared on the network were printed and posted on the walls.

After Electronic Cafe ’84, Galloway & Rabinowitz felt they had reached “the limits of models.” Their effort to put their research into practice took a more lasting form with the beginning of Electornic Cafe International (ECI) in 1988.

ECI took the form of a networked lab with a headquarters in Santa Monica. Through ongoing activities that spanned decades, participants experimented with poetry slams by videophone, poetry and comedy over ISDN with Deaf children and adults, Palace chat environments and VRML experiments, videoconferencing with opposition activists in Central America.

The story of ECI has not yet been told, but the project put into practice many ideals of network culture that are today regarded as naïve or utopian. It demonstrated the viability of an alternative vision for network culture—small-scale, community-managed, and not-for-profit—that stands in stark opposition to the internet of today.

Note: Net Art Anthology originally included Galloway and Rabinowitz’s Electronic Cafe ’84. Following conversations with Galloway, this page has been revised to encompass the Mobile Image project as a whole.

_Mobile Image was a collective that included a rotating cast of collaborators alongside Kit Galloway or Sherrie Rabinowitz. Extensive credits for Satellite Arts, Hole in Space, and Electronic Cafe 84, as well as other projects by Mobile Image, can be found at Galloway & Rabinowitz’s website.