The work of UBERMORGEN, an artist duo of lizvlx and Hans Bernhard, Vote-Auction was an online auction platform created during the 2000 US presidential election that claimed to allow Americans to sell their vote online.

Vote-Auction was less an actual marketplace than an intervention into political discourse, and no actual transactions took place. Nevertheless, the project quickly ran afoul of authorities, who made extensive and unsuccessful efforts to shut it down. This only fueled the project’s considerable media attention, which included over 2,500 news features on television, radio, and print magazines, including an extended CNN feature entitled “Burden of Truth.”

As a work of parafiction, Vote-Auction raised salient questions about the moral basis of law and the opacity of democratic institutions under capitalism. According to the artists, elections are flush with corporate cash, and Vote-Auction merely carried the relationship between money and votes to its grassroots conclusion.

As pressure mounted, it was purchased by lizvlx and Hans Bernhard—who were then living in Vienna, outside of US jurisdiction—in a sale brokered by the activist/artist group The Yes Men.

Read Diana McCarty on Vote-Auction’s relevance, then and now

A slide about Vote-Auction from The Yes Men’s presentation “Trade Regulation Relaxation from ca. 1970 to the present,” 2000.

Presenting themselves as Eastern European business people rather than artists, and mimicking the grandstanding language of established political groups, UBERMORGEN experimentally embodied the inconsistency between political discourse and political practice. 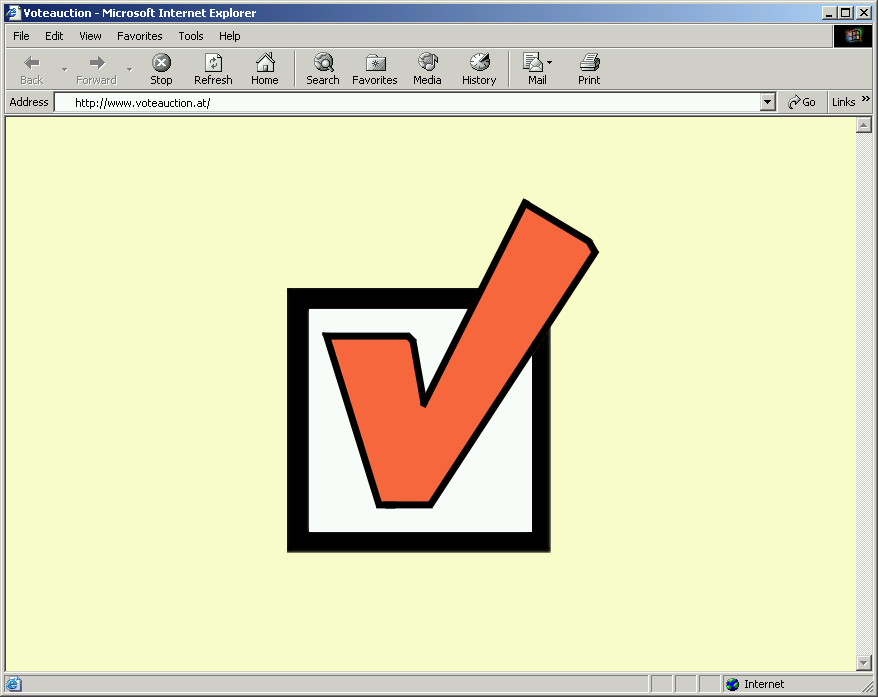 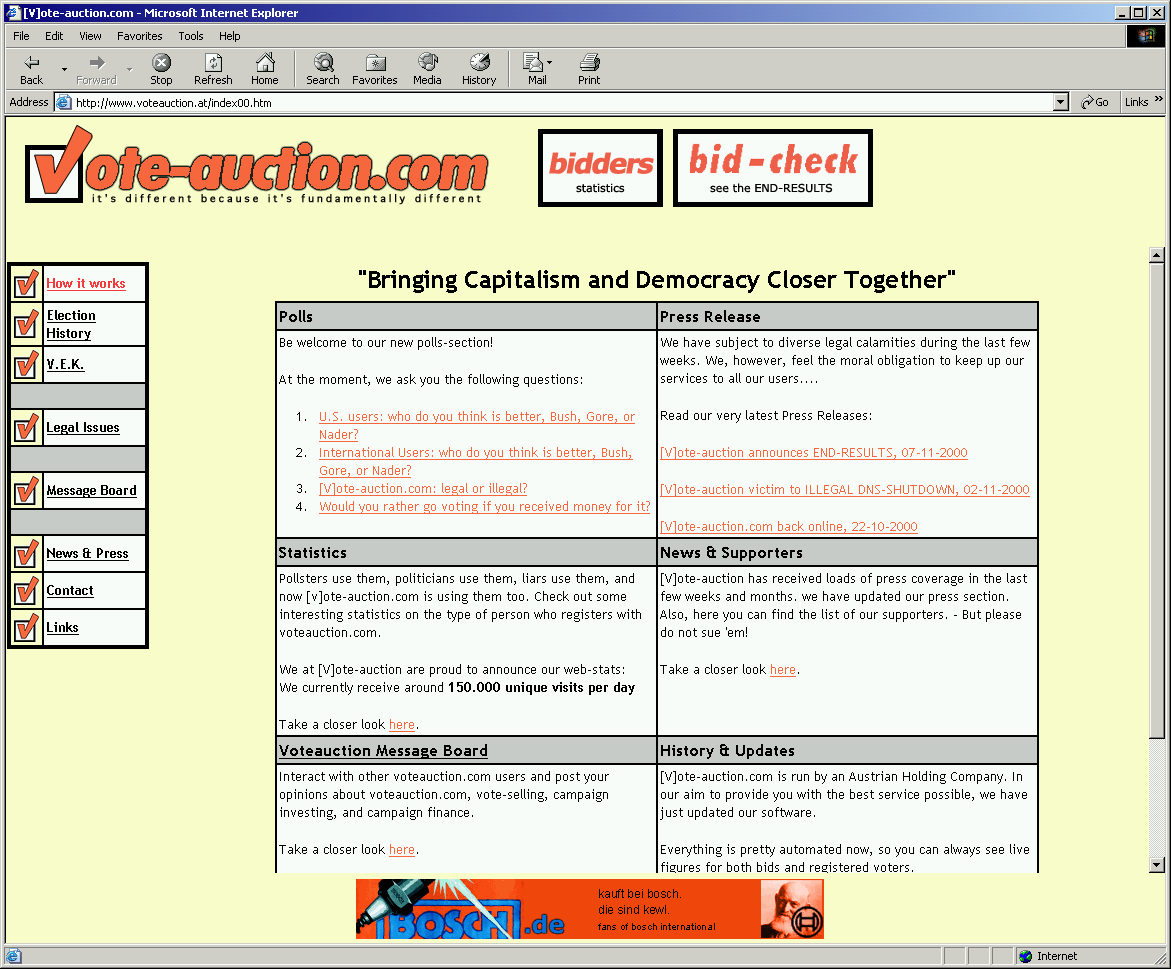 Numerous states took legal action against Vote-Auction, succesfully issuing injunctions against the domain registrars for the URLs voteauction.com and vote-auction.com. The site was forced to migrate from a US to a Swiss domain registry.

A cease-and-desist letter sent to the members of Vote-Auction by the Texas Attorney General's office in 2000.

While many legal cases were brought against the duo, none followed the correct procedure for delivering legal papers to non-US residents. UBERMORGEN estimate that they were sent 1,500 lbs of legal documents as part of investigations that cost an estimated $5 million.

Meanwhile, the story of Vote-Auction gained traction in the press. UBERMORGEN estimate that they gave 20 to 30 interviews per day for a period of two to three months; an episode of CNN’s Burden of Proof was dedicated to discussion of the project.

As election day approached, UBERMORGEN noticed increasing numbers of government agency-related visits in their access logs. They suspected that investigators had accessed their server, although they had taken care not to record user data.

Read an interview with UBERMORGEN by Michael Connor

Because of the risks the project presented, UBERMORGEN liken Vote-Auction to the interventions of Viennese Actionists, which engaged the body in violent, grotesque, and sexual actions. Like Actionism, Vote-Auction centered bodily conflict, but in a digital context.

“It felt very physical, and the body was under threat. It wasn’t digital, it wasn’t abstract; it was as real as if you were threatened on the street by someone with a knife.” —UBERMORGEN

Vote-Auction extended beyond the 2000 election with projects including Injunction Generator, an agency for manual election recounts, a second website in 2004 titled SELLtheVOTE.COM, the concept exhibition “THE*AGENCY [for manual Election Recounts] (Graz, 2004), and extensive documentation on the UBERMORGEN.COM website.

The project lives on today as a case study for various legal issues, particularly international domain-related disputes. The conflicts over the project’s domain highlighted the DNS system’s key role in political conflict, as an aspect of internet governance that is directly subject to state control. 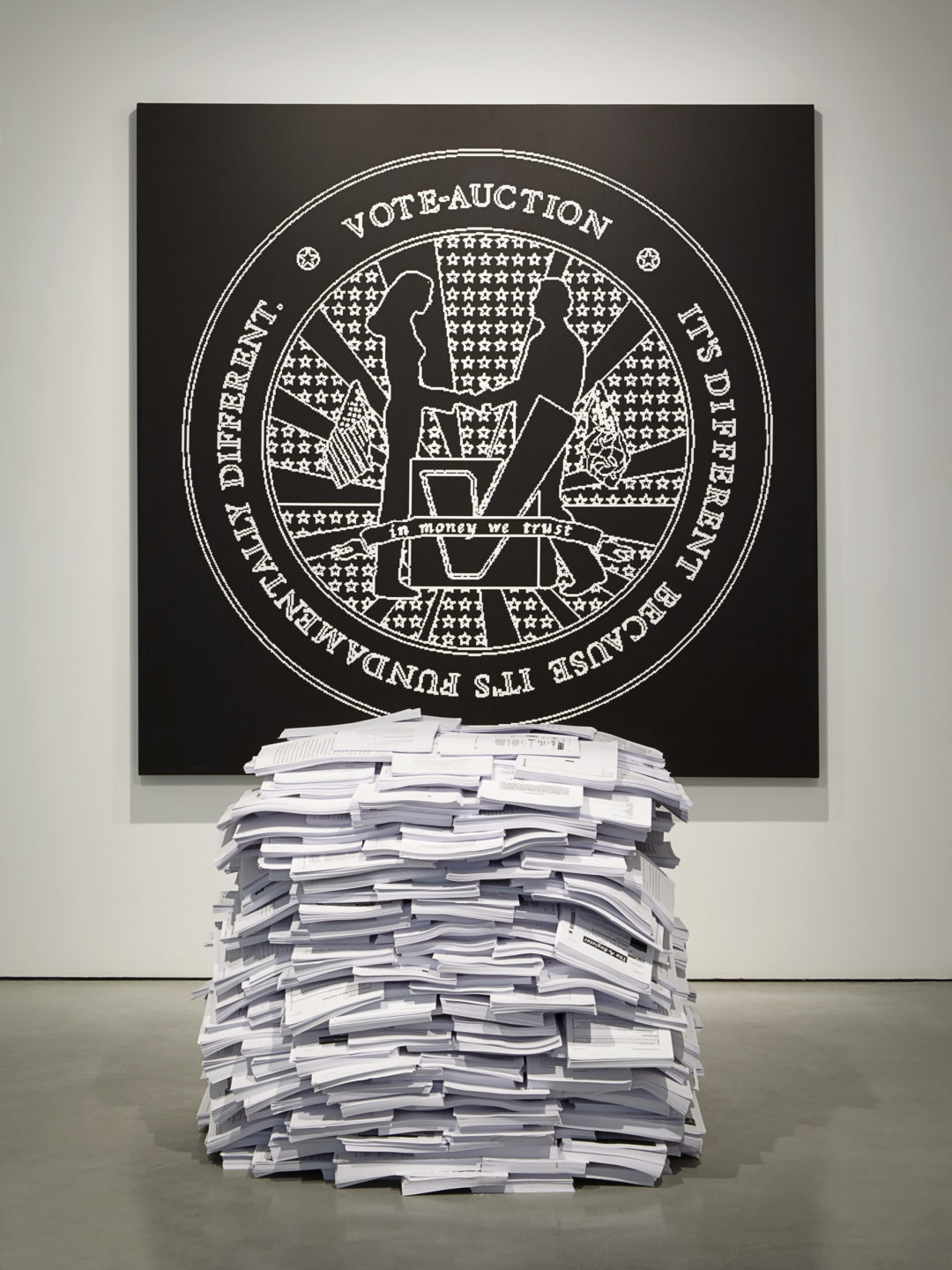