The World in 24 Hours

The World in 24 Hours was a networked happening that linked sixteen cities worldwide, with the media art festival Ars Electronica in Linz, Austria acting as the central node. Each site was given one hour—coinciding with midday, local time—in which to generate and transmit content over a wide range of devices and networks, including computer terminals, phone, fax, and slow-scan TV.

The project reflected Adrian’s early insight that the network is not an artistic medium in the traditional sense. Rather, networked art would be defined by exchange—“taking place in the space between machines, only when the machines were on.”1

“Cyberspace has become a very useful way to describe a space that may or may not be there. It does not stop you being a biological entity when you use technology.” — Robert Adrian

Robert Adrian’s artistic practice involved an effort to build and shape telecommunications networks. The World in 24 Hours was one such effort, imagining the possibility of a global network of artistic collaboration and exchange.

To achieve this, his methodology placed great emphasis on using relatively affordable technologies in order to ensure the widest possible access. Nevertheless, Adrian found it difficult to involve collaborators outside of his existing social network.

Nevertheless, the project’s scope hinted at the diverse practices that could be brought together through the network.

“From SSTV transmissions from the Western Front artist space in Vancouver to the radio broadcasts relayed over the telephone by the artist-activist collective around Radio Zona in Florence, Italy, to telexes dispatched from Istanbul by the German radical art group Minus Delta T during their Bangkok project (in which they hauled a huge rock from Germany to Thailand with a truck), to faxes sent by the dancers of the Body Weather Laboratory in Tokyo, the project was open to any art discipline.”2 — Josephine Bosma 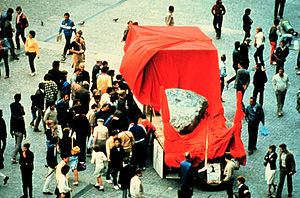 Many of the participating artists in The World in 24 Hours thus did not directly address networks as part of their practice. Rather, many of them simply put their existing work in dance or illustration onto the networks that Adrian directed them to.

Other artists were, like Adrian, actively involved in building networks themselves. One of these was Bill Bartlett, who took part in the Vancouver node of The World in 24 Hours.

Fax sent by Bill Bartlett and Hank Bull to Vienna as part of The World in 24 Hours.

In 1979, Bartlett had invited Adrian and others to a groundbreaking online artist conference: the Artists’ Use of Telecommunications Conference at SFMOMA, which took place in February 1980.

The event used the IP Sharp (IPSA) network, a timesharing network offering international clients access to a time on a mainframe computer in Toronto via local gateway computers, and Slow Scan TV.

“We paid by the character, and I remember using my mortgage money to make ends meet. Later versions must have used a different billing, but it still added up; people, like today, loved to cc everyone with massive documents...” — Bill Bartlett.3

Bartlett had been given a free account to IPSA via artist Norman White, a friend of IPSA engineer Robert Bernecky who gave artists free accounts without his boss’s knowledge.

Artists and other users on the ARTEX network in 1982.

Adrian incorporated the IPSA network into The World in 24 Hours. Terminals at a number of participating venues were used to connect to the mainframe, printing out transmitted content directly to paper in the absence of a screen.

“Meters and meters of paper were running out of the printer,” recalls Adrian’s partner Heidi Grundmann.

The World in 24 Hours set out a project of considering network technology in relation to existing sociocultural networks and practices. Although the technology itself has evolved considerably since it was performed, Adrian’s underlying approach continues to be valid. In a sense, he anticipated a world in which many aspects of existence would be shaped by communications networks.

“Adrian’s was a virtual environment made up of clunky machines together, between which connections sputtered and moving shapes unfolded.” — Josephine Bosma

3 From a recent email to Josephine Bosma.