Bogosi Sekhukhuni’s Consciousness Engine 2: absentblackfatherbot imagines a technological simulation to take the place of the artist’s relationship with his estranged father, as part of his ongoing investigation of human consciousness in a digitally networked age.

Shown on side-by-side screens in a gallery-based video installation, the work depicts the disembodied, 3-D-animated heads of the artist and his father, who converse in robotic text-to-speech voices, reciting a conversation from Facebook chats that took place when Sekhukhuni was eighteen years old. Awkward and halting in their exchange, the avatars face many of the same obstacles to communication as their analog referents, lending this lo-fi simulation a surprising pathos.

This work was included in “THE ART HAPPENS HERE: NET ART’S ARCHIVAL POETICS” 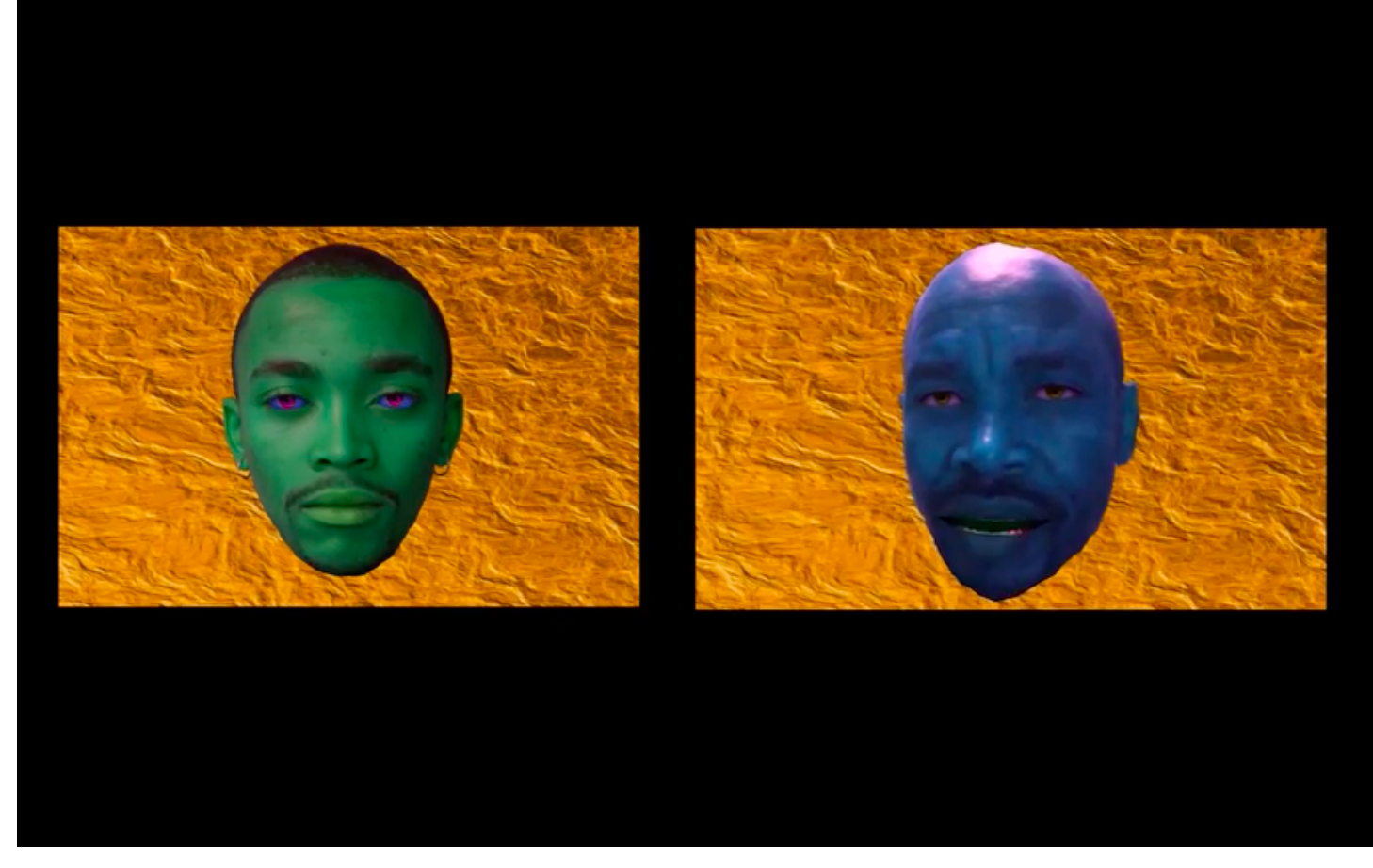 Consciousness Engine 2 took up the distinct idea that consciousness is “something that you accumulate from the outside”—in this case, through interaction with another.

Drawing inspiration from a video made at Cornell’s Creative Machines Labs of two chatbots in conversation, Sekhukhuni created his own simulated exchange, replacing the AI-driven conversation with a series of real interactions with his father.

“The idea is that interaction is an act of consciousness creation, or a consciousness engine, in a poetic, but also very real way.” —Bogosi Sekhukhuni

In its presentation at the New Museum, Consciousness Engine 2: absentblackfatherbot makes use of Pepper’s Ghost displays, making the heads of Sekhukhuni and his father appear as holograms, while referencing 19th century optical illusions.

At other times, the work is shown on video screens, with the two avatars floating against vivid orange backdrops.

Their heads, each color-replaced in an unnatural jewel tone, float on matching backdrops, their mouths artificially moving in sync with the voice over. 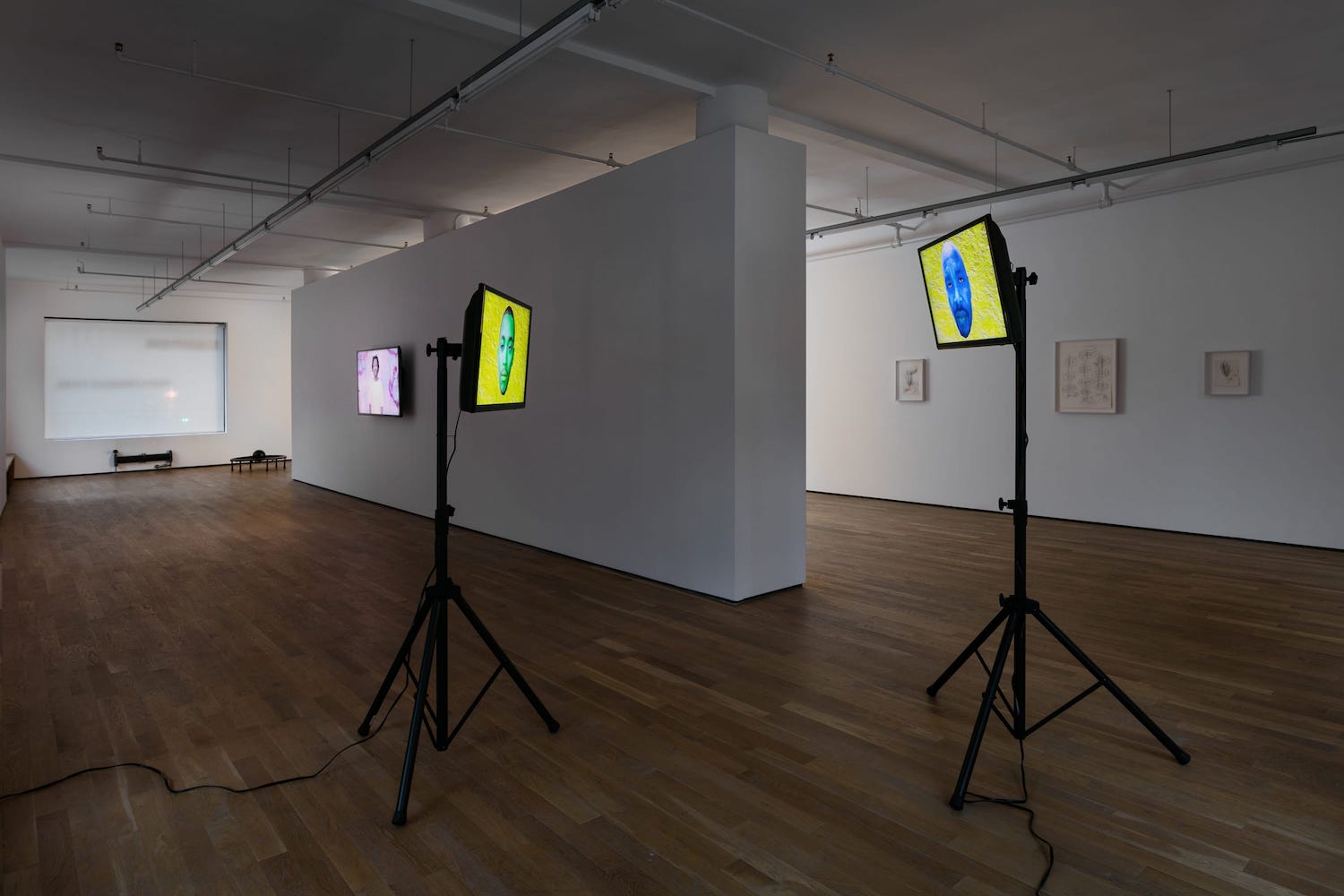 Consciousness Engine 2: absentfatherbot also toys with idealist views of the internet as an enabler of community and empathy, marking a period of the internet when oversharing was seen as a radical act.

The avatars function as augmentations of the father and son’s “real” selves, through technological intervention; however, the augmentation compensates for an emotional deficiency in their relationship rather than enhancing their physical or mental capacities.

The avatars give voice to messages exchanged between the artist and his correspondence father took between late 2009 and spring 2013. Although it is presented in this work as a continuous conversation, there were often months-long gaps between replies. Eventually, Sekhukhuni’s father blocked him.

The flaws of Consciousness Engine 2—the stilted and painful dialogue, the emotionless voices, the obvious artifice of the graphics—can give the work an almost humorous feel. Yet the proposal that is central to this work is not an entirely failed one.

At the very least, this lo-fi simulation asks viewers to take seriously the idea that consciousness might take shape through exchange with others, for better or worse, and that these exchanges might accumulate outside of the conversants’ own bodies.